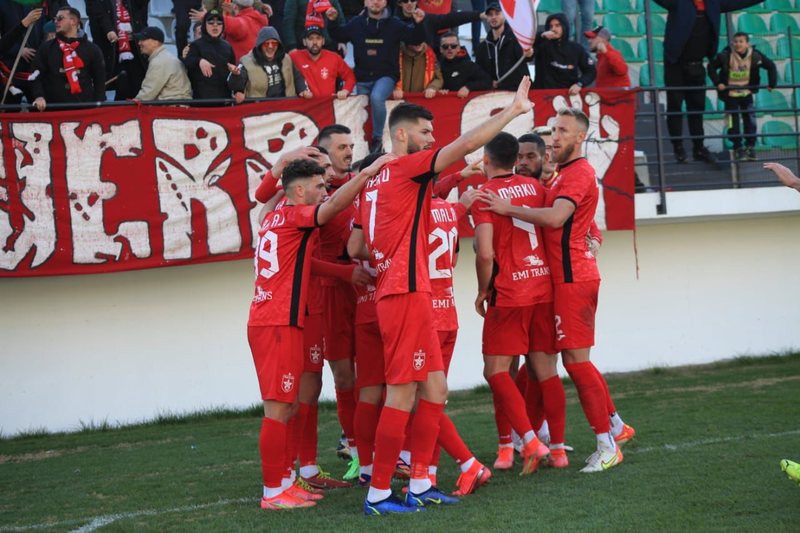 Yesterday, two matches of the 16th week were played, where Partizan's deep victory, 3-0, against Egnatia, in the transfer, was definitely noticeable, a victory that makes the "bulls" fly immediately in the rankings, overtaking Teuta. and climbing to fifth place, even approaching significantly with the group of leaders. Undoubtedly this victory marks a good start of 2022 for the red team, which now must simply keep pace. Partizan under the leadership of coach Dritan Mehmeti has started well, but we have to wait several games in a row to give an accurate assessment of how much it has changed positively and how it has given the effect of the winter market. Meanwhile, Teuta is immediately in crisis, which Kastrioti proved to him yesterday. The reigning champions do not have a chance to win the title again in Durrës this edition, on the contrary, if they continue with these pointless stops and defeats they will soon find themselves in the ranks of teams risking relegation. Of course, the attention was taken by the "bulls", who yesterday not only started this calendar year with a victory, but they hope that Partizan will return as a contender in the second part of the season, which was also evident from the words of the striker. Mala after the meeting.

Mehmet's partisan is a "storm"

Partizan matters that they won, despite the fact that the figures 3-0 do not show the truth of what happened on the field of play. Because, it was a duel with two images, where the first part spoke mostly about the locals of Zekerija Ramadani, who also hit the crossbar with Imer, while in the second faction the dominance was all of the reds, who scored 3 times. It was Esat Mala who opened the scoring in the 47th minute, while Skuka doubled the figures in the 61st. Dream debut for the striker, in the first match with the Partizan jersey. To seal this meeting, thought Rrapaj, who scored the third goal in the 73rd minute. With this triumph, Partizan returned to victory after 2 consecutive losses, climbing to the quota of 21 points. "Red Bulls", are positioned in 5th place. As for Egnatias, the people of Rrogozhina, hold 9th place with 14 points in 16 games. In the next challenges, Partizan will face Kastriot in the capital, while Egnatia is a guest in Shkodra against Vllaznia.

Mala will be strong in the second half of the season

The striker of the red team, Esat Mala, said after the match that the team accomplished the mission in this meeting, but guaranteed that Partizan of the second half of the season will be very strong. "I am glad that all the boys are engaged and have given their best. We have suffered psychologically. When the result is in our favor, the boys express themselves better. We gave the maximum. I hope we continue this way. We are in a position where we need points, to give the best to end every match like today. The managers have only asked us to give our best and take the matches one by one. Do not fly with only 2-3 results. The next match is the next goal. I have great confidence. "We will be very strong in the second half of the season," said striker Mala.