No wonder, Poland wakes us up from our dreams and drops us to third place 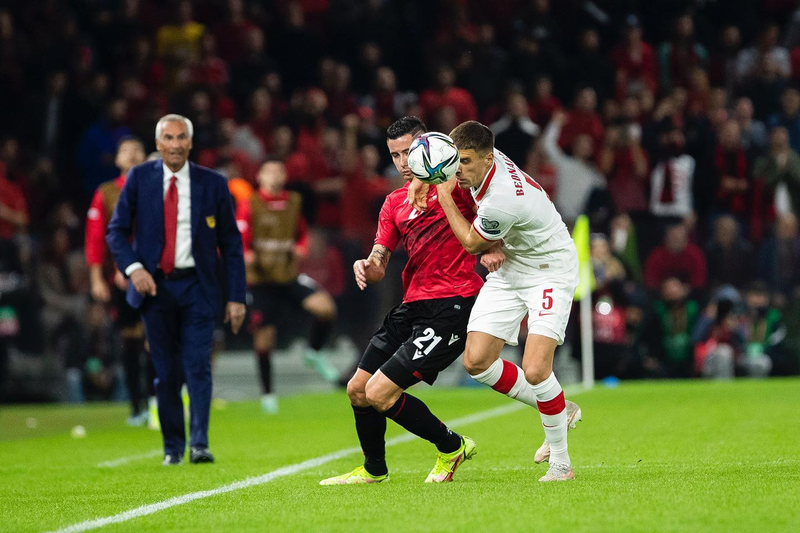 In an "Air Albania" in maximum capacity, with an ardent red and black fan, the long-awaited match between Albania and Poland started last night, a decisive duel for the second place in the qualifying group for the World Cup "Qatar-2022". After singing the anthems, the match started fiery for both teams, under the emotion caused by the "volcano" red and black from the stands. But this spectacle was faded by the bad behavior of a group of fans and consequently the match was interrupted for 20 ', and yet, Poland won 1-0 and "wakes us up" from the qualifying dreams we had prepared. The Red and Blacks finally fall to the ground.

The first part, everything equal

The match starts abruptly. In the 9th minute, Rei Manaj is found in a front position in front of the Polish area and tries to shoot himself, but he makes a mistake because he is blocked in the final moment and then even Uzuni fails to take advantage. The Poles react after this moment, where in the 14th minute, after a corner kick, the friends almost scored in Berisha's goal, but the ball ended up on the crossbar. The Poles start to take command of the midfield after this moment and take more risks, but Berisha reacts properly in the 22nd minute. Ours try in the 25th minute, doing everything well, but Keidi Bares's front kick turns out to be wrong and the ball ends up far above the goal. In the 29th minute Levandovski appears danger in our gate for the first time, but the defense energetically avoids the danger after his quick shot. A minute later Berisha expects another long-range shot from the Poles. In the following minutes, the Poles get nervous and commit many fouls, while ours keep calm and play carefully. Lewandowski does not win the duel with Plum, while Buksa is punished with a yellow card. The first half ends in a 0-0 draw.

The second part shows the bad side of the fans, interruptions and rebounds

The second half was very good for ours, who calmly control the opponent, where the Plum that blocks Lewandowski stands out. In the 48th minute, our team has a good chance, Hysaj enters the area and tries to create space, but the referee gives a penalty kick to the Poles, irritating Hysaj, who is punished with a yellow card for protests. The game catches fire and both camps move towards the attack. Reja even orders the team to put pressure. To increase the offensive power, he puts Broja in the game in the 59th minute, instead of Uzun, and a few minutes later (65 ') Lenjan instead of Trash. In the 67th minute, the red and black goal miraculously escapes after Lenjan's mistake, but in the end Kumbulla left on the side. In the 77th minute, after some moments of distraction, Poland finds the goal, where Klich crosses from the right, replied Sviderski on the other wing, very close to the right vertical bar, scoring the goal. Celebrating it provocatively in front of our fans irritates the latter who shoot with bottles and objects, causing the match to be interrupted. The fans found it difficult to calm down and the UEFA delegates retreated to the rest rooms to make a decision. After 20 minutes the teams return to the field. The red and blacks were available for approximately 15 minutes and coach Reja introduced ?okaj and Bajramaj, to give impetus to the game. Despite the efforts of the players and staff, it must be said that the morale of the team had dropped and the cases of the last minutes were not at the required height. As a result, Poland won 1-0, which overtakes us in the standings and has a better chance of reaching the World Cup.