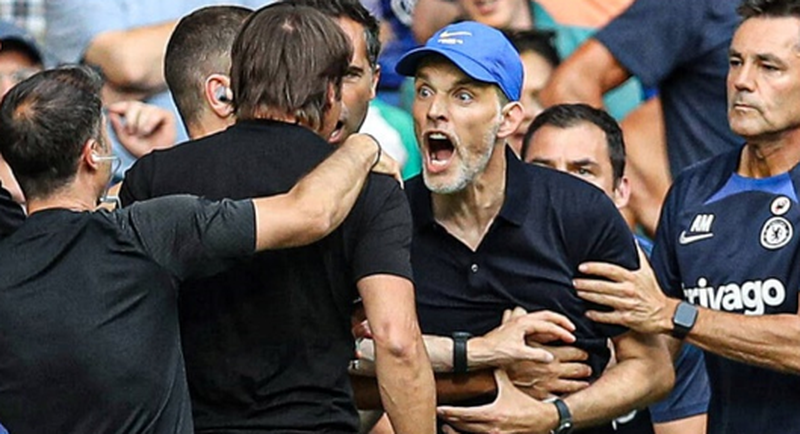 Chelsea drew in the London derby with Tottenham in a meeting that caught fire on the field and on the benches. Beautiful goals, blatant missed chances and great tension, on the field and on the benches, where the Thomas Tuhel-Antonio Conte clash was not missing, and they almost fought with punches and kicks. The locals dominated the first half, which they closed with an advantage thanks to Kalidu Kulibali's Eurogoal (19'). The Senegalese defender scored a volley after Mar Kukurella's cross from the corner kick. The second part of the challenge also brought the "awakening" of the Konte team, while Rahim Sterling for the locals and Harry Kane for the traveling team missed clean opportunities to score. The 68th minute also brought the equalizing goal. Pierre-Emile Hojbjerg's powerful shot stopped in the net, a goal that brought tension and clashes on the benches of the teams. Konte celebrated near the rival bench and collided with the German Tuhel. The staff stepped in to separate them, play resumed and Rhys James put the home side back in front nine minutes later after Sterling's assist. Tuhel put Armando Broja on the field in the last minute, as the referee awarded six extra minutes. Tottenham did not give up and Harry Kane headed in the equalizer in the last minute. The Tottenham captain celebrated with the fans, while the end of the match brought another clash with the two managers being sent off in a challenge that produced everything. Meanwhile, Nottingham Forest secure victory in the Premier League after 23 years. The historic English team defeated West Ham 1-0 at the City Ground, securing the first three points in the Premier League, where they returned after a long absence. Nottingham was also lucky in this encounter, as the "Hammers" missed a penalty by captain Declan Rice (65'), hit the crossbar twice, while VAR canceled a goal in the first half. Meanwhile, the Nottingham team also hit the post in the first half, the last minutes which were full of emotions. Algerian Benhrama sent the ball into the net (43'), but technology stopped the friendly team's celebration. Nottingham took advantage and scored the winning goal in the second extra minute of the first half. The locals also scored the second goal (55'), but the VAR called it irregular. West Ham attempted an equaliser, but were met by a superb Dean Henderson. The goalkeeper of the home team was in excellent form. The 25-year-old managed to save another penalty midway through the second half, denying captain Rice's goal.