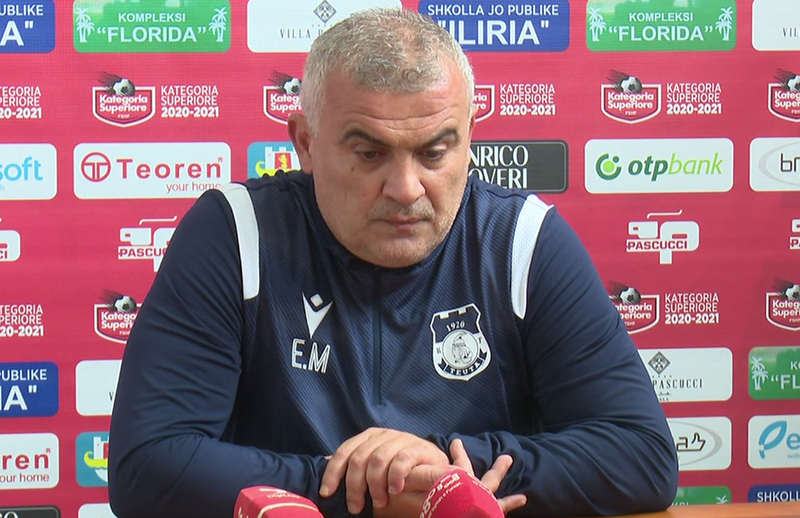 Today will start the fifth week of the Superior Category, with two meetings as a start, but this week's duels continue tomorrow until Monday. So the distribution of this round is in three days, but undoubtedly the main duel is that of the leaders, Teuta and Tirana, which will be played on Sunday evening. We emphasize that this is a very significant match for both camps, because not only the leaders of the rankings play, but also two of the favorite teams for the title, ie two of the main contenders for the competition. In these circumstances, the loss is unacceptable and is not even considered by the parties, but the victory has motivated both teams and therefore a strong match is expected both physically and technically-tactically. In yesterday's press conference, coach Edi Martini of Teuta spoke about his team, but did not stop biting Sunday's rival, especially about the rapid recovery of white and blue players from coronavirus. In fact, Teuta's coach talked about other developments, including the consequences of stopping the race for a few days as a result of the national team matches.

Martini indirectly talks about the risk of infection by Covid-19

Teuta's coach, Edi Martini, is ironic in the press conference for the match with Tirana. The coach of Shkodra, from Durrës, bit him on the issue of COVID-19 infections. "First of all, I wish a speedy recovery to the boys who had Kovid. I would say that Tirana is lucky that its players have passed Kovid so quickly, because I had Ivanovic with Kovid and it lasted me three weeks. Despite the fact that his physical condition was very good we did not allow him to join the team for security reasons. And apparently Tirana was lucky to be healed quickly. "I told the boys that this situation should not put us to sleep and their condition has nothing to do with Kovid at the moment," said the technician. Martini, however, foresees a very strong challenge, between the two teams that he considers contenders. "It is a very strong match, definitely. I would say the teams of the first places collide, because the points are there. At the moment the first place is very large word because the difference in points is small. "We have appreciated it to the maximum, as we have always done in recent years when we played with Tirana", he underlined.

Rest not the right one for Teuta

The coach of the Durrës team from Shkodra finally expressed the consequences of the several-day interruption of the race. So, he did not welcome the interruption of the championship due to the matches of the National Team, as in this case he helped the opponent, but still insists that his Teuta enters the field as a favorite. "In every match we are the favorites, regardless of the opponent we face, so we will be like this this time as well. I did not like this interruption because we were having a good time. Anyway, the situation is good and the players are in optimal shape, with the exception of Idrizaj who has an injury and has not trained with the team. "I think we will start where we left off," he added.