World Cup arrives in Tirana, Rama: One day, maybe we will win 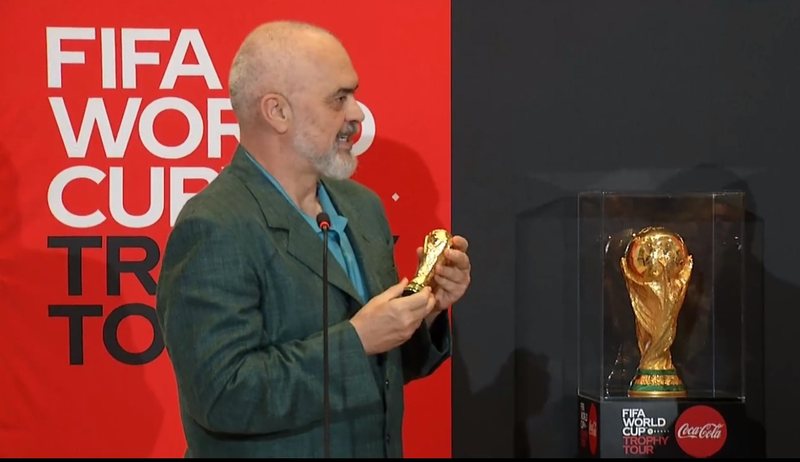 The trophy of the "FIFA World Cup" tournament was exhibited yesterday in the Albanian capital, Tirana. It was exactly the Prime Minister Edi Rama who together with the former Brazilian football player Gilberto Silva singled out the moment to look closely at the cup. In his speech, Prime Minister Rama did not spare the praise for the former captain of the National Team, Lorik Cana. "Now even the customs will need 5 to clear a World Cup. Hall that we would like to have and in the future, the Cup will stay only 5 hours, I wish that as many football fans have the opportunity to visit today this open environment of the Prime Minister to see the cup, here is Lorik Cana, I do not know who the captain of the national team is today and it is Lorik's responsibility, that those who come after him are like vice. Captain. We are dealing with the cups of others,

Veliaj and Kushi are waiting for the World Cup, a message for the final on May 25

Fifa World Cup from "Coca-Cola" has arrived in Tirana. The Mayor, Erion Veliaj together with the Minister of Education, Evis Kushi received the team of the World Cup Trophy at Rinas Airport. Veliaj told the conversation with the former Brazilian football player Gilberto Silva, from whom he received the message that to be an athlete, politician or engineer you have to be a good person. Among other things, Veliaj reiterated the call for Wednesday to be a car-free day for the Conference League final as there will be an influx of capital and everyone should come out white respecting the rules.

Football icons are not allowed to see the cup, Demollari reacts

Great Albanian footballers over the years, invited to be yesterday at the World Cup trophy display ceremony, were not allowed to take pictures of the cup. Among them, the great Sulejman Demollari reacted, in the capacity of the former captain of the national team. "The shame of Coca Cola with the World Cup in Tirana! We were invited today to watch the World Cup but were not even allowed to take a picture. It was embarrassing to see so many football figures at that ceremony and the Cup was hidden from us football people. Only Coca Cola can make me invite you to the World Cup arrival ceremony in Tirana and keep you away from the trophy and show us the FSHF museum that was moved to the lobby of the Prime Ministry. As a former captain of the National team and with contributions to this football, I have never felt more offended than today by such behavior. "I have been in the same activities everywhere in the world, but never in a shame like this with Coca Cola", wrote Demollari in the message conveyed on the social network "facebook".

Renovation time in Milan, Ibra with "symbolic" salary, the Maldini-Massara duo is expected to become official

Tite attacks Pochettino: Whoever puts Neymar in the wing play is not a coach but an ass

Neymar "Non Grata" in Paris, PSG communicates the decision to the Brazilian!

Refused to wear the shirt with LGBT symbols, the PSG player is expected as a hero in the homeland

Surprise / Coach Sarri does not like him, Lazio puts Hysaj for sale