FSHF blames the Poles, UEFA starts examining the evidence of the evening of October 12 in "Air Albania" 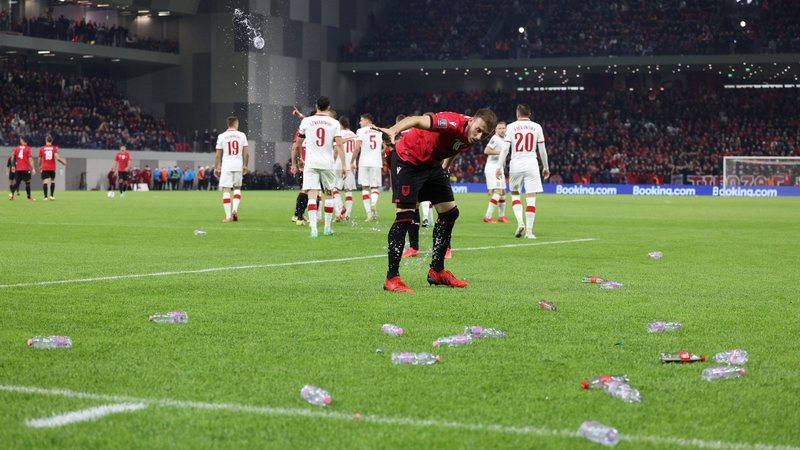 The Albanian Football Federation held a press release yesterday, explaining its position regarding the violent events that took place at the "Air Albania" stadium during the Albania-Poland match, closed with the victory of the Poles with the result 1-0. In that match, after scoring Poland's goal in the 77th minute, there were violent moments from the fans, who threw water bottles and other objects at the Polish players and towards the Polish players, bringing the match to an end for more than 20 minutes. . Already, this incident will be the subject of review by the disciplinary and ethics commissions in UEFA, so a severe punishment is expected for the AFF. The latter yesterday maintained its position, through a press release, where not only justifies itself with excuses such as "imperfect organization", but has gone further, making responsible the group of Polish fans who provoked and threw water bottles or and broke the benches of the plant. In fact, the Polish fans were just as violent and threw objects on the field the same as some segments of our fans, but had to accept from the AFC that the organization left much to be desired, as long as fans were allowed to enter with various items and water bottles in stadium.

Reaction with "long shot" of FSHF

The AFF's reaction yesterday was "long-range shooting", which means that it not only did not take direct responsibility, but reminded UEFA that in Albania there were no defined hooligan and violent fan groups. "The match also showed us some serious problems, which must be resolved and addressed as soon as possible. Incidents that do not honor us at all, Albania and its wonderful fans. The Albanian Football Federation has been working for months with UEFA regarding an important activity in terms of stadium safety, also in the framework of the Conference League final that we will organize on May 25, 2022. After the events in the match with Poland this activity becomes even more urgent, so that all the actors and factors involved in such matters do their best to organize a match. We are aware that Tuesday night's incidents do not honor us. We need to draw all the lessons as far as we as organizers are concerned. We had 22,000 great fans and only a dozen individuals tarnish everything good the team has done so far. One thing is very clear: We do not have violent fans, we do not have a history of problematic fans, on the contrary, the excellent behavior and support that our fans give in matches and off the field has become an object of pride for us ", writes FSHF.

Then comes the debate that sparks debate, accusing Polish fans. "The events are a consequence of a constant provocation, and a very aggressive behavior by the Polish fans who have been hitting our fans in two stands for almost 2 hours. "Polish fans are known for such behavior and for days all the authorities involved in the match have done their best to prevent more serious events", emphasizes among others the AFF. Meanwhile, UEFA is gathering material for this match and reviewing the evidence. Of course, a severe punishment is expected for the AFF.