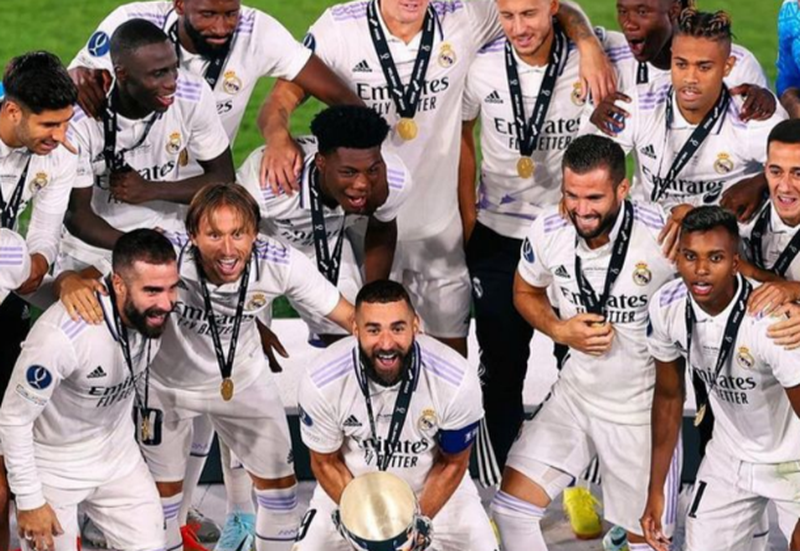 Real Madrid start the new 2022-2023 season in the best way possible by securing the first title of the season in Helsinki, Finland. The 14-time Champions League winners are the European super champions for 2022, beating last year's Europa League winners Eintracht Frankfurt in the final with a clean score of 2-0. "Los Blancos" thanks to the goals of the Austrian defender David Alaba in the 37th minute and the French bomber Karim Benzema in the 65th minute. In this final, the two new acquisitions of Real's summer market, center back Antonio Rudigor and midfielder Aurelie Çuameni, debuted. As predicted, Carlo Ancelotti's boys secured the fifth European Super Cup in the club's history. In this way, "Los Merengues" equal Milan (1989, 1990, 1994, 2003, 2007) and Barcelona (1992, 1997, 2009,
Historic evening for Benzema, becomes Real's second best scorer
An emblematic and historic night was yesterday in Helsinki for Real's new captain, Karim Benzema. The veteran surpasses the Madrid icon Raul Gonzalez in the list of the best scorers in the history of the "royal" club. The legendary Spanish number 7 scored 323 goals with the white shirt in 16 years, while the 35-year-old Frenchman yesterday scored the 324th goal with the Madrid club in 13 years in their service. The world football star gives another strong proof that he deserves to win the most important award for footballers "Golden Ball".
Historic night for Ancelotti, the most successful in the European Super Cup
Even for Real's coach, Carlo Ancelotti, yesterday's success achieved another record in his career. He becomes the coach with the most European Supercups won; 2 times with Milan in 2003 and 2007 and 2 times with Real Madrid in 2014 and 2022. With the triumph in May over Liverpool in the Champions League, "Don Carlo" was declared the successful coach in this competition. Regarding his personal career as a coach, the 63-year-old Italian added the 24th title in his career. In the UEFA trophies, he is the most accomplished coach with 9 cups, leaving behind Sir Alex Ferguson and Giovanni Trapatoni.
The 96th trophy in history for Real, "Los Blancos" can't get enough
With yesterday's triumph in Helsinki, Real Madrid completed its trophy cabinet with the 96th cup won in its 120-year history. The Spaniards have the opportunity to secure 2 other complementary trophies (the Spanish Super Cup and the Club World Cup). As for the new edition, Real aims to win all possible trophies in one season (6), a target it has never achieved in its glorious history. Ancelotti's team won last season the Spanish championship (La Liga), the Spanish Super Cup and the most coveted trophy by him, the Champions League.