Did you know this? Why is it dangerous to store potatoes in the same place as onions, experts say 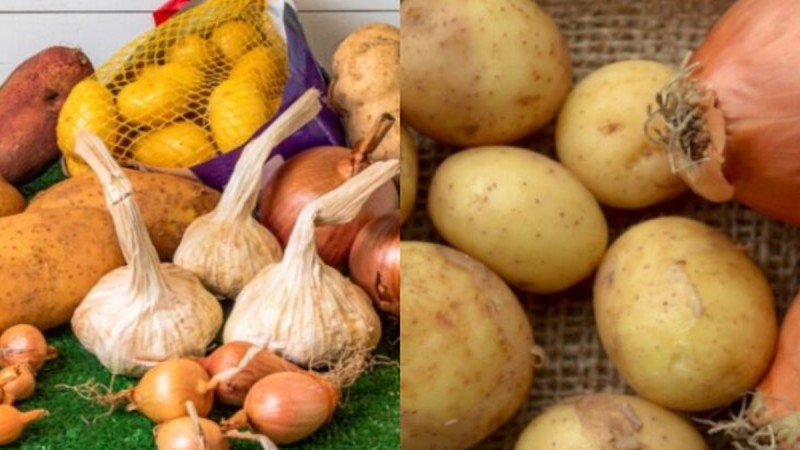 Potatoes combine well with onions in terms of cooking. However, there is a good reason not to store potatoes next to onions. On the other hand, it would be nice to put them next to an apple.

So, the problem with these two vegetables is that onions are more "moist" than potatoes and belong to the vegetables that release ethylene which accelerates the ripening process and therefore causes the potatoes to rot faster.

While onions should be avoided with potatoes, garlic has absolutely no problem. Potatoes are an integral part of the Mediterranean and European diet and are enjoyed by young and old alike. At the same time, they are extremely useful when consumed boiled or baked, due to the high content of carbohydrates, fiber, potassium and vitamin C.

However, there is one condition that can turn potatoes into a poison for the body. When potatoes have turned green and sprouted due to prolonged exposure to sun, heat and humidity, they should not be consumed as they may cause side effects in the body.

According to the lecturer at Nottingham Trent University's Faculty of Agriculture, if we eat a large amount of these baked potatoes, we can experience symptoms of poisoning, such as nausea, diarrhea, tendency to vomit, stomach cramps, headache and dizziness.

As he explains, sunlight and heat stimulate the production of solanine, a bitter poisonous chemical. In fact, potato skins and tails contain high levels of it.

Although the green color in the potato skin is an indication of the presence of chlorophyll, which is not toxic, its presence also indicates concentrations of solanine. This neurotoxin, produced in the green part of the potato, is part of the plant's defense against disease, insects and pests.

Of course, you can peel the potatoes and discard those parts, but they will taste a little bitter. He advises that instead of eating them, plant them in a pot and enjoy the new potatoes they will give you.

From cheese whey, tea and up to.../ The popular doctor Zef Gjeta shows the PRODUCTS that keep the liver healthy and clean it completely of harmful toxins

They're worse than cigarettes, find out which foods are addictive

It has incredible values, this is why you should consume olives every day, you will be surprised what will happen to your body

The latest study is published, this is the most effective method for heart health, scientific research reveals the secret that everyone should know

Blood pressure increases depending on the seasons. How to protect yourself from the weather

They are worse than cigarettes, which are addictive foods

Experts say: You should not do plastic surgery on this part of the body

Can't stop eating? Experts show you the right solution, the simple trick that "cuts" your appetite

You should definitely include it in your diet! Here's the superfood that protects against osteoporosis and diabetes