Tensions in the north of Kosovo / Vucic speaks after the meeting with Stoltenberg: We respect the mission of KFOR, we want to avoid any kind of escalation and conflict 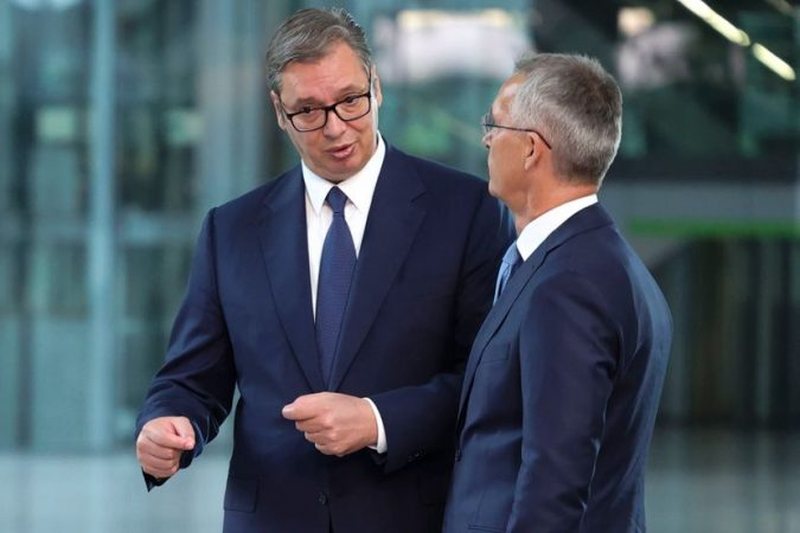 The Secretary General of NATO, Jens Stoltenberg, today held a meeting with Serbian President Aleksandar Vucic, who stated that his country respects the mission of KFOR.

"We talked about what happened. We don't need to see the situation from one perspective every time. We respect KFOR's mission and their announcement that night had the effect of reducing tensions", said Vucic, referring to the statement of the NATO mission on July 31, that it is ready to intervene if the situation in the north escalates of Kosovo.

He added that peace and stability are of crucial importance for Serbia.

"Tomorrow we will have difficult talks, we do not agree on almost anything with Pristina. Serbia will adhere to public international law, the Brussels Agreement. As for bilateral relations, I emphasized that Serbia willingly is neutral and will remain so," said Vucic.

The Serbian president emphasized that they want to avoid any kind of escalation and conflict.

"We explained our position, I submitted the list of incursions of special units in the north, for which four mayors should have consented", he said while insisting that the Serbian army and police never crossed the administrative line in the north of Kosovo.

"I am grateful to NATO for not coming up with such untruths, unlike some others. No one apologized for the lie that we were going to attack. Serbia does not need anyone's foreign bases, Serbia is militarily neutral, it wants to secure its country and its people. And this is how it will behave in the future," said Vucic.

After the meeting with Vucic, Stoltenberg will also talk with the Prime Minister of Kosovo, Albin Kurti.

Meanwhile, Vucic will meet today in Brussels with the EU envoy for dialogue, Miroslav Lajcak, and then with the US special envoy for the Western Balkans, Gabriel Escobar.

The meetings come within the framework of the next meeting on the dialogue that will be held tomorrow between Kuri and Vucic.