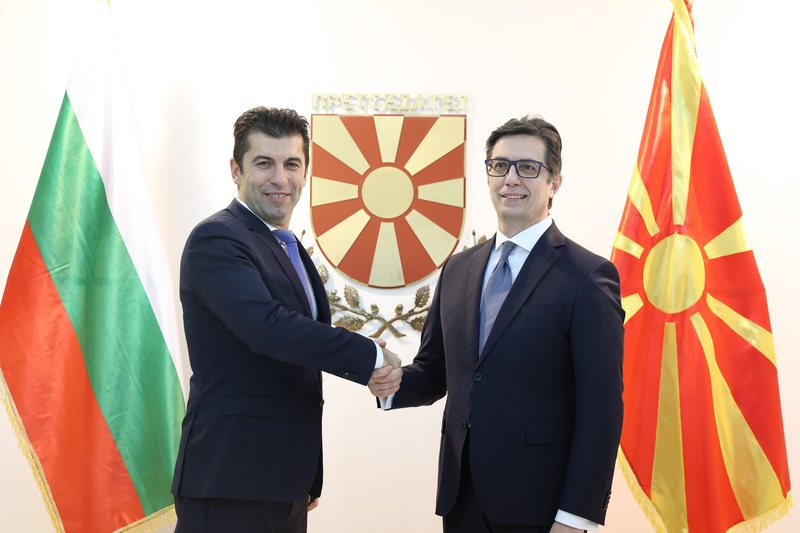 The statements after the visit of the Prime Minister of Bulgaria Kiril Petkov in Skopje, provoked numerous reactions yesterday, regarding what was achieved during this visit and what all this means for the European path of Northern Macedonia and relations between Skopje and Sofia. The visit to Macedonia was assessed as a real success by the Bulgarian Prime Minister Petkov. "On the one hand we shook hands going there first and on the other hand they gave us a note that we hoped to get two years ago. This note is much more important than just the short and long name. That note indicates that the Republic of Northern Macedonia has no territorial claims against Bulgaria. The note was talked about, talked about and negotiated, and we got it just because we took a new approach. "This is yesterday's great success." he expressed. Former Bulgarian Prime Minister and leader of Bulgaria's largest opposition party, Boyko Borissov, has also spoken out about receiving such a guarantee, talking about the dispute with northern Macedonia. Borissov stressed that Bulgaria has made efforts since the time of President Zhelyu Zhelev, until the signing of the Good Neighbor Agreement between Skopje and Sofia, and even said that only on Tuesday it realized that Northern Macedonia will have no claims. territorial to Bulgaria. "For so many years before me, no Macedonian politician has allowed himself to say such a thing - that they are giving up and will have no territorial claims against Bulgaria," he said, recalling that Bulgaria was the first to support The Republic of Northern Macedonia to join NATO, its independence and wants it to join the EU. After this move, it seems that we can have the green light for a pact that would unblock the integration of Tirana and Skopje.

During his visit to Skopje, Prime Minister Petkov met with the President of Northern Macedonia, Stevo Pendarovski. The Macedonian head of state commented on Bulgaria's request for the inclusion of Bulgarian citizens living in Macedonia in the latter's Constitution, as a precondition but the normalization of relations between the two countries and the lifting of the veto that has stopped Macedonia's path to European integration. and Albania. "Bulgaria's request that Northern Macedonia register Bulgarians as a minority in the Constitution is interference in internal affairs," he said. According to the president, the fact that Macedonian citizens in Bulgaria are not even recognized as a minority should be taken into account. They are considered Bulgarian citizens and their rights in this regard, they must claim at the individual level. Pendarovski clarified that if such persons do not find their right, then they are forced to turn to the Strasbourg Court. "There are Macedonians in Bulgaria. And will we intervene from here as a state to help their rights, no. Why not? Rule number one in international law, international politics, Article 2 of the UN Charter - applies to all countries in the world: there is no interference in the internal affairs of the country. They are Bulgarian citizens, citizens of the Republic of Bulgaria. I assure you that the Macedonian state at the state level has never tried to push them there, to provoke them, to tell them - go out, help them. It is set at the individual level. You feel Macedonian, you will say that. If they do not give it, go to Strasbourg. This is the way. "There is no other way," said Pendarovski. On the fact that the request of the Bulgarian state for the inclusion of Bulgarian citizens in the Constitution is considered interference in the internal affairs, Pendarovski said that he did not talk to him at the meeting with Petkov, as at no point was asked by the other party about this. points. "You can not tell me from outside, they are our citizens. There are Bulgarians in Macedonia, but our authorities are responsible for their rights. If we violate their rights or they are not happy with the way we defend their rights, then they will go to Strasbourg, but they are my concern because they are mine, our citizens. Just as I have no right and should not say that you will give rights to Macedonians in Bulgaria, so he has no right to tell me whether or not we should include Bulgarians in the Constitution.