Terrorist act or human error? Prosecutors come up with the official version, the autopsy of the victims of the tragedy is also published: In their lungs were found ... 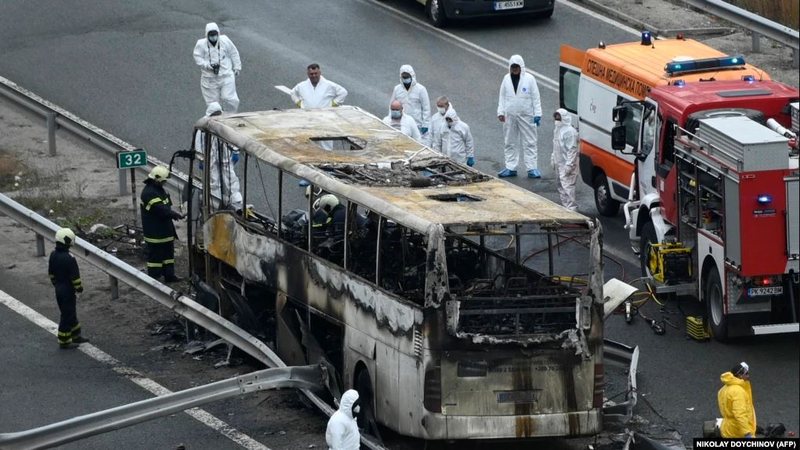 The human error is the main suspicion that is believed to have caused the accident with the bus of Northern Macedonia on a Bulgarian highway, said in Sofia, the Deputy Chief Prosecutor and Director of the National Investigation Service in Bulgaria, Borislav Sarafov.

"At the moment, the most reliable track is that of the human factor, for which the conditions of the section where the accident occurred are being examined, such as signalization and street lighting. The sidewalk on which the bus driver has hit is not only unnecessary on the spot, but also dangerous. "There was no explosion at the scene, but the loud noise that was heard was that of the bus that crashed on the sidewalk, maybe that is why the bus caught fire," said Sarafov.

"The autopsies show that all the passengers died from suffocation from the smoke, not from the impact. This means that they were alive at the time of the fire. The final assessment of the causes of the accident will have to be given by the final analysis, but the main version at the moment is human error - as the cause of the accident, Sarafov said at a press conference on November 25.

He said that the bodies of 44 people were found at the scene of the accident, eight survived while another is missing.

"During the interrogation, one of the survivors said that eight people were rescued, not seven. At the same time, 44 bodies were found at the scene of the tragedy. Investigators are checking the version to see if there is another survivor and where he is. "He may have left the border with another vehicle, another bus, which needs to be checked", said the prosecutor Sijka Mileva.

"The version of a terrorist act has been properly researched by us. We categorically reject it, "Sarafov said.

Suspicions that there was fuel on the bus, which may have been carried for smuggling, have also been dismissed as a possibility of a fire breaking out.

The latest occurred in 2018, when 17 Bulgarian tourists died after the bus slipped and overturned due to humidity.

Accidents are usually caused due to road conditions, old cars and speed.

According to official data, 628 people died in road accidents in 2019 and 463 last year, in the state with 6.9 million inhabitants.