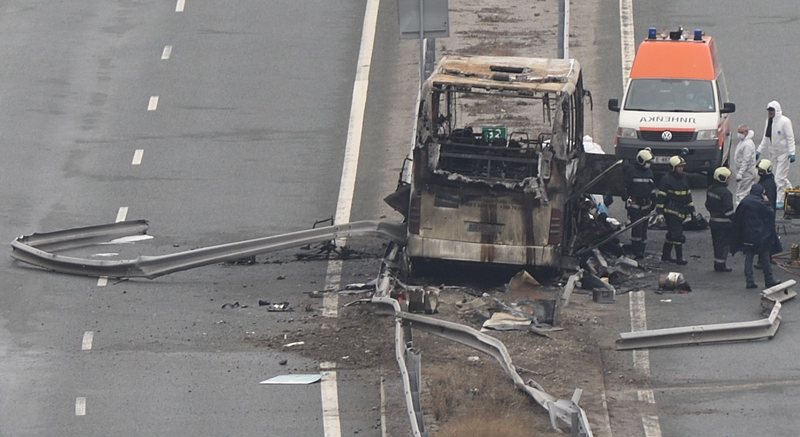 The control of the Ministry of Regional Development and Public Works on the Dragicevo-Dikanja road of the Struma highway, where the tragic accident took place in which 45 Albanians from Northern Macedonia lost their lives, has not revealed any serious problems, Bulgarian media write.

"The road surface is in good condition. The middle line has allowable visibility limits on the pavement. The visibility of the speed limit tables is above the allowable level. "The protective railings established in 2007 met the norms", said the Minister of Regional Development and Public Works Violeta Komitova. She specified that in 2021 new norms have been approved for protective handrails, which must be of the "buffer" type.

The only problems revealed by the inspection are that the part from the roundabout near Dragiçevo to the village of Dolna Dikanya, has a road segment with a limit of 90 km / h, while in the accident area it is 120 km / h. The maximum speed limit was increased to 120 km / h in 2013.

"The speed has increased for several reasons," Komitova commented. Speed ??reduction has already been suggested until a detailed road analysis is performed.

In the case of a bus accident, speed is not a factor, as the vehicle is limited to not exceed 100 km / h and its trajectory in the last meters, has previously been shown to be moving below this speed.

Destroyed an entire neighborhood in Greece, this is the cause that is suspected to have caused the powerful explosion this morning

1 million euros would be the reward / New details are revealed for the scary scene, Vuçiç would be killed by a…! The person who ordered the assassination was the president ... Here is the plan for the elimination, the Serbs are looking for this well-kn...

The situation gets out of control / The lives of citizens are endangered, snow and frost in the neighboring state, the government makes an urgent decision and takes the army to the streets (VIDEO)

Kosovo against Serbia, Kusari-Lila: April elections have no chance to be held in our territory

Occurs once in a lifetime / Storm Elpis hits the famous islands of Greece, "paralyzes" every activity

Extreme temperatures in the Balkans / Citizens in Greece make dramatic appeal: Please save our children

Get ready! Meteorologists issue URGENT announcement: This rare phenomenon is expected to hit the country, here is what will happen in the coming hours