Will you sign Kosovo's independence? The Prime Minister of Serbia answers 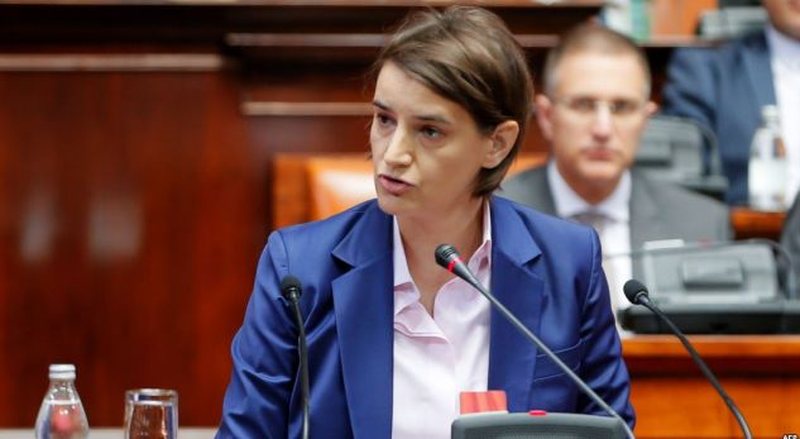 The Prime Minister of Serbia, Ana Bernabic, believes that a historic agreement between Kosovo and Serbia is possible, but says that this requires courageous and visionary leaders. She says that, as Prime Minister, she would not sign the recognition of Kosovo's independence.

As Serbian media report, this statement was made by the Serbian Prime Minister when asked by journalists, if she would sign the recognition of Kosovo's independence, answering briefly: "No".

Bernabic stressed that Serbia is committed to resolving the frozen conflict and that "our country's interest is peace and stability, as well as membership in the European Union."

"Finding a compromise that would ensure lasting peace and stability and our European path are in Serbia's interest, because they will ensure that we continue to strengthen economically," said the Serbian Prime Minister.

She assessed that in Pristina there are no leaders with vision and courage. "It is possible that we will lose the historic chance because of this, which will not appear again for a long time. "However, I hope it will not happen," said Bernabic.

Serbia is alarmed after the failure of the referendum in the territory of Kosovo, threats start that the same thing will not happen in the April 3 elections

"Hurricane" of earthquakes in Crete, three powerful tremors within 15 minutes

Residents experience moments of horror, alarmed go out in the middle of the night, a strange noise is heard from the underground (VIDEO)

Shook the whole world / Djokovic's father explodes in revolt and bursts strong statement: Novak was hit with 50 bullets in the chest

Bulgaria puts Macedonia in the "red zone", the measures it must implement are clarified

After inserting the ballot, the Serbian politician makes the sudden action with the ballot box, the video that is circulating rapidly is published

Unexpected! Citizen votes and then breaks the ballot box (VIDEO)