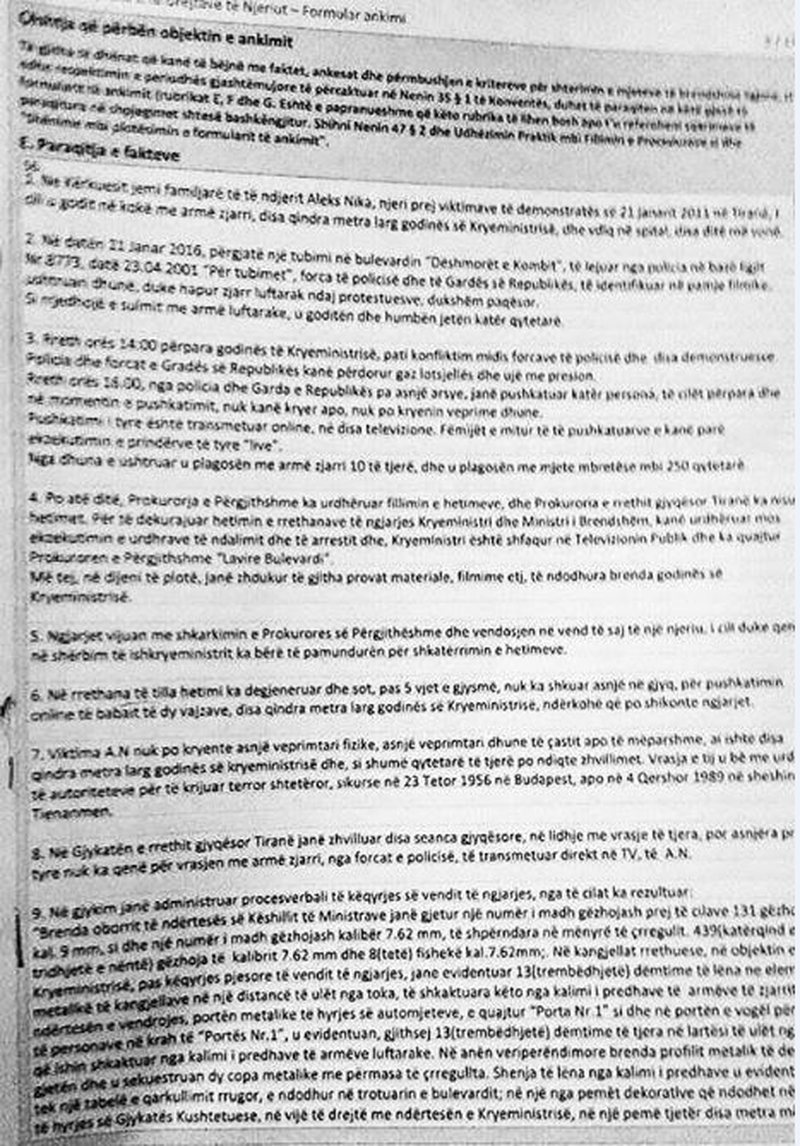 The details of the file that the relatives of the victims of "January 21" have sent to the Strasbourg Court to find justice are revealed. 8 months ago Strasbourg started the investigation of the case for the murder of Alex Nika, for which there is no suspected and accused perpetrator. Family members have been suing the European Court of Human Rights for several years, claiming that the authorities have violated many articles in the Human Rights Convention. The request of the family members provides details from the investigation process, while the former prime minister of that time becomes responsible. In the file sent to the Strasbourg Court, Alex Nika's family members described the investigative processes, which they claim were closed by a political decision by the previous government and the delay by the current government for their compensation.

In the document, the relatives of the victim, Alex Nika, claim that the father of the two girls was killed by order of the authorities to create state terror. The materials of the file state that Alex Nika was not committing any violation at the time of the murder, he was located a few meters away from the Prime Minister's building and did not pose any danger. "Victim Aleks Nika was not performing any physical activity, any instant or previous violent activity. He was a few meters away from the Prime Minister's building and like many other citizens was following the developments. "His assassination was ordered by the authorities to create state terror." The document states that while the investigations started the same day, the government ordered the non-execution of the detention orders and then destroyed all the material evidence that took place inside the Prime Minister's building. On the same day (January 21, 2011), the General Prosecutor's Office ordered the start of the investigation and the Tirana Judicial District Prosecutor's Office launched the investigation. To discourage the investigation of the circumstances of the event, the Prime Minister and the Minister of Interior ordered the non-execution of detention and arrest warrants. "Further, with full knowledge, all material evidence, filming, etc., which took place inside the building of the Prime Ministry, have disappeared", the document states.

According to what the relatives say in the file, the Guard fired to kill. It also mentions the court decision given on the event. "From the inspection of the scene, it is easy to see that the Republic Guard and the State Police fired at the people, aiming to kill as many as possible. In the decision no. 100, dated 7 February 2013, of the Tirana Judicial District Court admits that: "Although the prosecution body acknowledges and reflects this situation, the fact and the illegal and aggressive actions of some of the protesters has not conducted any investigation in terms of intensity and the importance of the attack in relation to the actions of the defendants (in office) and the charges brought against them ", it is stated in the Strasbourg file.

The relatives asked for additional evidence to overturn the decision of the High Court to close the file, but were rejected by the General Prosecutor's Office when it was headed by Adriatik Llalla. “On 22.06.2016 and 22.07.2016 I addressed the General Prosecutor to request information and a copy of the file and my request was rejected. Authorities do not provide any information on the progress of the investigation. "The prosecution has ignored the applicants and has not provided any information," the document reads.