"Paid murder in the Assembly hall" / The clash with Salianji for the file of Rezart Taçi, Erion Braçe reacts again and explodes the 'bomb': The smell of dirty money was felt! (VIDEO) 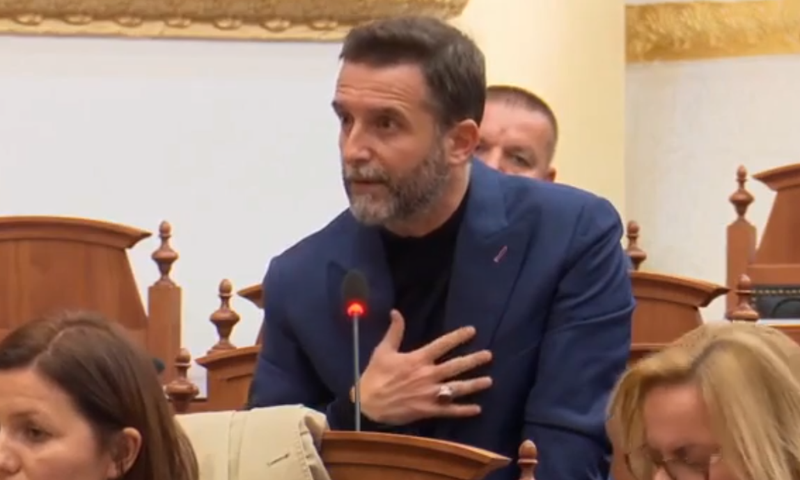 Former Deputy Prime Minister Erion Braçe has reacted again today for the clash that took place yesterday in the Assembly with the PD deputy, Ervin Salianjin. It all started after Salianji said that a deputy prime minister was involved in Rezart Taçi's file and publicly asked Brace if he was him.

Brace not only denied this, but with his word it seemed as if the 'ball' was left to Arben Ahmetaj who was deputy prime minister in the period when the wiretaps were made.

Brace in the post he made today on social networks, calls the clash yesterday in the Assembly as 'paid murder'.

Not only that, but Brace also commented on the photo that circulated today, that he and Salianji were at the same barber.

"PAID KILLINGS" IN THE #APLOCATION HALL, WILL END!

"PAID KILLERS" AND "ORDERS" WILL COME OUT OF THE #ACONDAY HALL!

Murder is not just physical!

Murder is also to use the unique importance of the rostrum of the Assembly, to slander and conspire against a man from there;

Ordered and paid, it's all "paid murder"!

It does not matter if people believe or spit on the slanderer, the murderer.

Pooo it matters that, referring to facts, evidence, documents, the truth is made public and the media — it all did this yesterday and today.

But again it is NOT ENOUGH!

The Internet is the big ally of the assassin and the client knows this, so he pays for the murder from the rostrum of the Assembly.

In a previous case, the commissioners — some, collaborated with assassins and those with ordinary criminals who told everything when the smell of dirty money was felt, discovered, and persecuted;

BUT THERE IS STILL JUSTICE!

EVERY LETTER OF CURSING TO THE FAMILY!

Yes, I was there today to shave but simply, leaving there, I saw in the alley the hounds that guarded the next fear!

VO: one more thing not to be confused, I always go to shave, neither to pull the muzzle nor to fill the scars of crimes with botox

What will be discussed? After the meeting with Rama, Erdogan receives Vucic in Ankara, this is what the Turkish media write