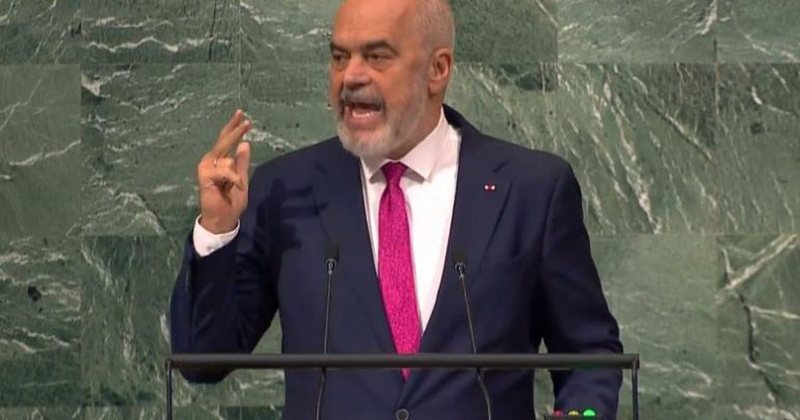 Prime Minister Edi Rama delivered his speech at the United Nations General Assembly. He has stopped talking about the "Open Balkan" initiative, stating that the path of close cooperation between the countries of the Western Balkans is the only one that leads forward.

From the floor of the UN, Rama once again invited the countries of the Western Balkans to join the initiative, starting with Montenegro, Kosovo, Bosnia & Herzegovina, but he also invited Greece and Turkey to this initiative.

"I will say a few words about the Balkans, about the future. Turn this region wherever you want and you'll find gasoline to ignite the divisions. But we have realized that the way to move forward is to do it together. A joint venture as part of a common framework. This brought us together with Macedonia and Serbia for Open Balkan. A platform for the Balkans, for Montenegro, Kosovo, Bosnia, Turkey but also for Greece. Let's put the past behind us and find good reasons to choose disagreement." Rama said.

In the midst of the UN, Prime Minister Rama made it clear to Serbia that Albania will continue to support Kosovo and that Serbia will have to recognize it as an independent and sovereign Republic.

"By strengthening relations with Serbia, Albania will not move a centimeter for support and attitude to recognize Kosovo. It is time for Kosovo and Serbia to move beyond the impasse and do their part for a peace agreement for an agreement supported by the EU and the US. Dialogue is the only way, it is necessary and the Open Balkans will help this process."

"If you are going to walk often, walk alone. If you want to go up, walk side by side" said Prime Minister Edi Rama.

"We will see Serbia through the eyes of Kosovo"/ Enkelejd Alibeaj targets the SP at the meeting of the two assemblies: the Open Balkans puts it on a dubious path...