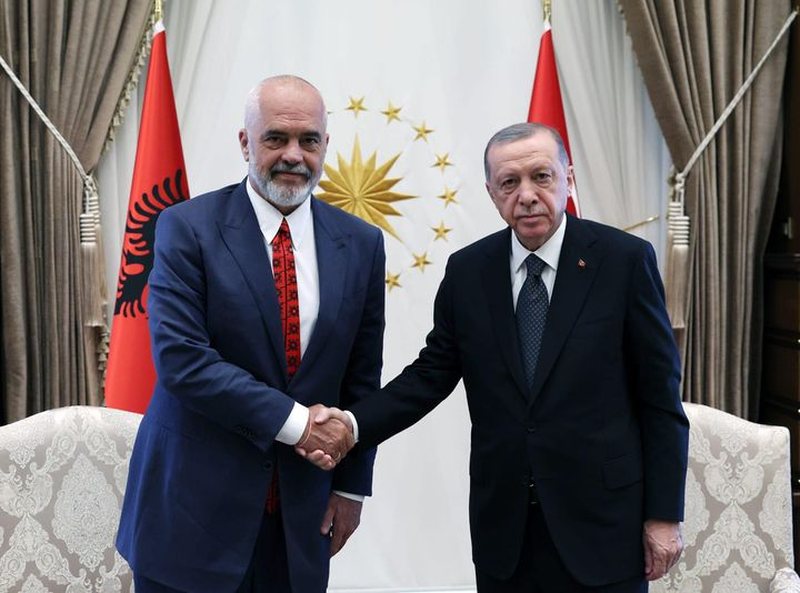 Prime Minister Edi Rama is in Turkey for the official ceremony of the Islamic Solidarity Games, which includes the Albanian Olympic team. Yesterday, Erdogan called Rama to the office and according to the sources of the "Sot" newspaper, the Turkish president demanded an account from the head of the Albanian government for not keeping the promise for the heads of the Gülenists, while he continues to hold the inauguration hostage. of the "Namazgja" Mosque, as well as it is suspected that the Turkish doctors in the Fier hospital that Turkey built, are being withdrawn by Erdogan. The meeting was cold and did not produce anything positive even though Rama went with clear ideas and intentions to reconcile. Even the Turkish presidency did not provide any details about the meeting. The Turkish presidency acted differently with the official ceremony of the Slovenian president Borut Pahor, who is on an official visit to Ankara. This meeting is broadcast with all the full details. So, one thing is certain that the prime minister was not invited by Erdogan and this meeting took place within the framework of the Islamic Solidarity Games, since the other heads of participating states were also reflected in the same way as Rama. The cold reporting and the short meeting, the strong demand for the "heads" of the Gulenists have cut off Rama's hopes to fix relations with Turkey. The head of the government is between two fires. After the Americans have placed Prime Minister Rama in a very difficult position. The USA took the Gülenists "to the defense". Some time ago, the American deputy ambassador to Albania, Demian Smith, visited the students of the "Turgut Ozal" school, the educational institution, which Erdogan has asked year after year to be closed, as it is funded by Gulen. In his post on the official website of the American Embassy, ??the images of the group of marines who accompanied the deputy ambassador to his meeting were released. "Turgut Ozal school students recently learned about the work of American diplomats and US Marines during a meeting with Deputy Chief of Mission Demian Smith and other officers from the American Embassy in Tirana," the Embassy's Facebook post read.

President Erdogan boycotted Rama a few weeks ago and a rift in relations between Tirana and Ankara was openly displayed. The Foreign Minister of Turkey, Mevlut Cavusoglu, began on June 15 official visits to Serbia, Croatia, Bosnia and Herzegovina and Kosovo. The Turkish minister held bilateral meetings and also met with the representatives of the Turkish communities in North Macedonia. But in these meetings throughout the Balkans, Albania was not on the agenda of the Turkish Foreign Minister. It is also expected that Erdogan will visit the Balkan countries next month, but it has not yet been revealed whether Tirana will be one of his destinations. Erdogan requested from the Albanian state that before his visit that he had planned before the end of the month of Ramadan, the "Gülenists" who take refuge in Albania and their business should be hit. During the visit to Albania, Erdogan twice repeated the danger of Fetullah Gulen cleric's organization for Albania. He said that Turkey feels hurt that its members find a place in Albania, and asked that measures be taken against them to avoid the repetition of a coup d'état like the one that happened in Turkey in 2015. However, this condition imposed by Erdogan did not is fulfilled by Rama. This has led to a breakdown in relations between the two leaders.