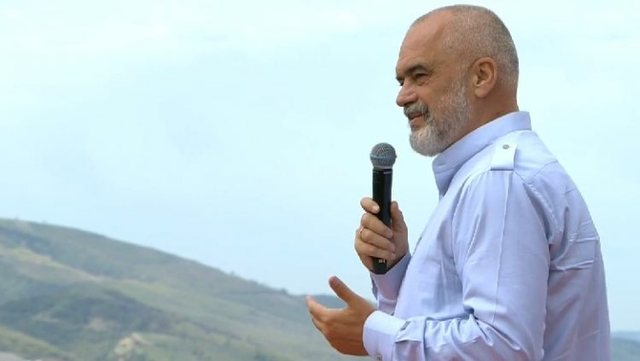 Prime Minister Edi Rama has made the next stop of the campaign in unit 1 in the capital.

Rama said that in order to do the work started, a third mandate is needed, while he said that power has always belonged to the people.

Rama: I want to stay here today with you today to see tomorrow, I live every minute with people's stress and worries, and generally you are stressed is not a normal time, a moment of difficulty but a long period, over 15 months since you and all of us have entered a stress phase.

At a stage of greater concern than usual, where to the usual troubles is added above a cloud that presses, from the earthquake, to the earthquake which actually struck the whole world the pandemic, which was felt in all the planets that everyone has made, in fear for the next day, for the life of the grandparents, during this whole period we have lived listening and reading about people like us who are separated from life or who are going through an extraordinary torture, when the restriction of movement makes it look like you are in a cage, so tomorrow it seems like an impossible mission, therefore man seeks to venture to find thousands of reasons to facilitate himself, and this we project the projection to those who serve and govern us.

Here is the moment for us to breathe and see that in these months we have not stayed in place, the light at the end of the tunnel is increasing.

We like not many others around us are doing mass vaccination, which is taking out thousands of anxieties a day.

Meanwhile, the return of people who lost everything in a few seconds continues. We have come a long way and continue to do so. To bring people back to the new neighborhoods, forgive me for Ali Demi, but they will be more beautiful than that.

As they were previously left there for meat for the ball, what their lead was that, today there are 210 thousand families but a few enterprises among them, that what they were waiting to legalize they already have. this did not end up being difficult from a legal point of view, but when they came to 21 thousand they were done while today 10 fish.

What comes next, that when everyone waits to have the vaccine, and then it comes, the man says it's gone. Now we are not in the conditions when we discuss whether we will go out or not, but then how will my economy be. So that young people do not run away when the borders are opened.

That is why I am here, at this stage of our history, to be told that exactly in this place on April 25 the SP will be voted, not for another 4 years for me because I have said it since day 1, and fortunately evil we live in a society very imbued with evil, and much diminishes when it is good and vice versa, and many half-truths flourish, I have the foundation of my pride that on the first day in that office I was the man who enters de del, the power has been yours, in no case has it been mine, my family, a close circle of family members and relatives.

"Dozens of traders have asked me for the president's number" / The MP rages his tongue and mocks Meta badly for the attack on the FRD offices: Lushnja needs you. Every pair of choices kills people

Erion Braçe comes out with the final ultimatum, demands the immediate dismissal of the senior director in Tirana. The strong reason whitens

Reopening the Gerdec case against Mediu, lawyer Vishaj warns of what could happen: That is why SPAK cannot act directly on this case. The college will ...

Submits the complaint to the CEC / SMI, makes a drastic decision, requests the declaration of invalid elections throughout ...