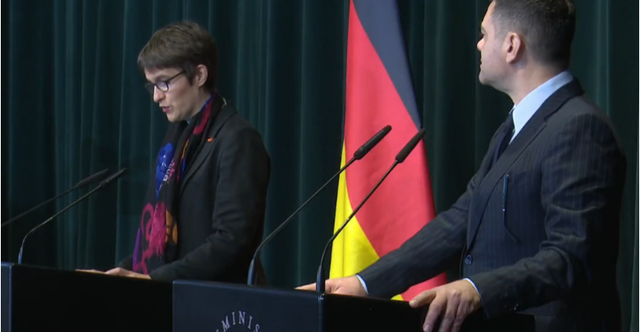 The Deputy Prime Minister of Albania Arben Ahmetaj shared two of the main points he underlined in the meeting with the German Minister for Europe and Climate, Anna Luhrmann, who is in Tirana this Tuesday, regarding the European integration of Albania.

"We did not leave without emphasizing the element of security, in the cooperation between the EU and the Western Balkans, as a non-permanent member of the UN Security Council.

In terms of integration, I divided the importance into two important elements of the formal opening of negotiations.

First the signal for the youth of Albania and the Balkans. The formal opening of negotiations gives a very strong and important signal to the whole younger generation for the guarantee and security of their future in the EU.

The second is the very process of integration, negotiations, is deep sectoral reforms in every sector of the life of the country.

These two elements, including all socio-political, economic and economic reasons, make integration a strategic process for Albania ”.

According to Ahmetaj, today the political spirit and discourse in the Western Balkans is unifying and towards one goal, the EU.

"The youth that represents the future must grow and be educated in the spirit of dialogue.
The Berlin process has sown some very positive in the youth of the Western Balkans, many have seen that the spirit in the Western Balkans does not resemble the spirit at all 10 years ago when the political discourse was harsh, unfriendly and hostile a lot, today the discourse and debate it is about opening up, investments, regional economic incentives, the common market, the road to the EU ”.