Slovenian President calls for implementation of agreements reached: Kosovo-Serbia relations are important for the entire Balkans 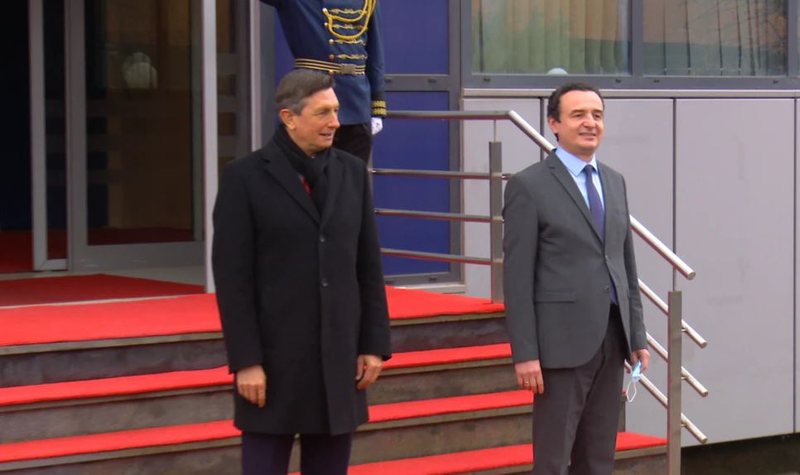 The President of Slovenia, Borut Pahor, said on Monday that the talks between Kosovo and Serbia are important not only for both sides but also for the entire Western Balkans, while calling for the implementation of the agreements reached in the process so far.

He made these comments in Pristina where he is on a visit after the one the day before in Belgrade.

"Since he is coming from Belgrade and after the conversation with (Aleksandar) Vucic, I can not say that in Belgrade they are convinced that Pristina does not have political will and that there is another opinion here that Belgrade does not have political will. "From my experience, without the desire to influence, I propose to overcome these disputes and continue with the talks", he said, underlining the good start of the progress in the relations between Kosovo and Serbia is the implementation of the agreements reached, including the one on Association of Serb-majority municipalities.

But the president of Kosovo, Vjosa Osmani, said that it is time to ask Serbia to implement the agreements and not to push forward the ideas that would create a dysfunctional state and more frozen conflicts in the region.

"I think that instead of trying to push forward ideas that are a relic of the past like the Republika Srpska, we should all engage in advancing the ideas of the 21st century, not the ideas of the last century that open the door to division of a new Serbian Republic in our region or a dysfunctional country in the region and many headaches for the international community and for this reason we as Kosovo are committed to pushing forward proposals that are democratic, comprehensive and that are in "for the good of all citizens, including Serbs," she said.

President Pahor and President Osmani also expressed opposing views on the Open Balkans initiative, launched by Serbia, Albania and northern Macedonia, but opposed by Kosovo, Montenegro and Bosnia and Herzegovina.

"Today in the conversation with the president I saw that there are many objections. When this initiative was launched, it seemed to me as an elegant way for further resolution of Kosovo-Serbia relations. "If the countries within the Berlin process or the Open Balkans cooperate in economic, political, cultural, or all other aspects, then some problems that are not currently solvable could be solved," said Slovenian President Borut Pahor. .

"For us, the Open Balkans is a space for expansion of Serbian hegemony. At the moment, Serbia, which is trying to play a leading role in this initiative, has no good intentions in relation to our country. It would be completely different if Serbia were a state that has peace, stability as its goal and as if it had recognized Kosovo, but as long as Kosovo aims to enter into initiatives such as its province, which it is not, because the reality is completely different. "So we are an independent and sovereign state, of course such an initiative does not serve the interests of our country, but I would also say the region", said the President of Kosovo, Vjosa Osmani.

President Pahor said his country, which currently holds the rotating presidency of the European Union, supports the integration of the Western Balkans. During his visit to Belgrade, he said that the process is very slow and that this has strengthened nationalist policies and ideas for border changes that are dangerous to peace and security in the region.

President Pahor's visit comes at a time when the European Union is stepping up its efforts to organize a high-level political meeting between Kosovo and Serbia in the framework of talks on the normalization of relations between them./ VOA