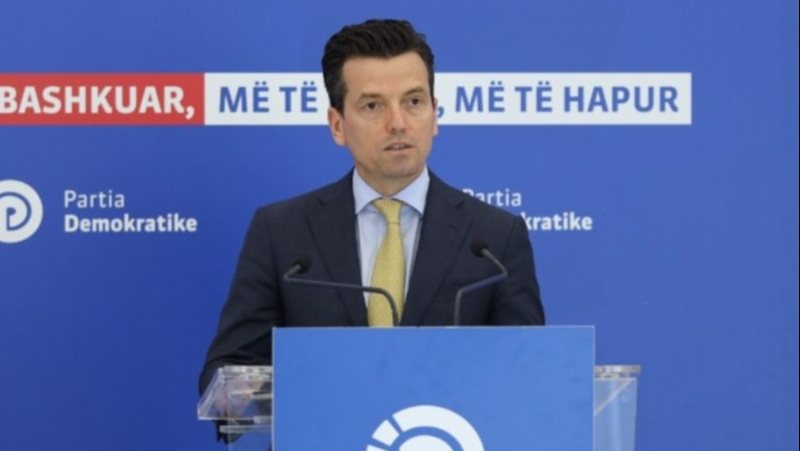 Democratic Party MP, Agron Shehaj, gave a statement to the media from the blue headquarters, where he denounced the "strategic investment law" calling it a criminal action that serves the government to rob and alienate properties on the coast.

The member of "Rithemelimit" said that this law is unconstitutional and so far has produced only ministers with hotels and resorts.

"The Democratic Party is following with great attention and concern the coordinated and criminal action of the government for the robbery and alienation of properties on the coast.

Every day, Albanian citizens are being introduced to shocking facts about how the coast is being plundered by ministers, senior Socialist Party officials and government businessmen.

Because so far it has produced only ministers with hotels and resorts and no strategic investments from well-known international tourism companies.

Seven years after its adoption by the socialist majority, we all have to ask a question. Who are the investors brought to Albania by the strategic investment law?

What are the well-known tourism brands that are investing today in the Albanian coast? There is only one answer; ministers and clients of Edi Rama.

The strategic investors brought about by this law are the Foreign Minister's husband, the cousins ??of the General Secretary of the Socialist Party, and the constant handful of Edi Rama's friends. They are the ones who are appropriating the properties and the beaches of the Albanian coast. They are the ones who are receiving the favors that come with the status of strategic investor, such as tax forgiveness, construction of infrastructure with citizens' money, appropriation of public property, etc.

And even on behalf of these the government is expropriating the property of citizens in flagrant violation of the Constitution. In the face of these facts, the Democratic Party has called on the Prime Minister Edi Rama in an interpellation regarding the announcement of strategic investors of Minister Xhaçka's family.