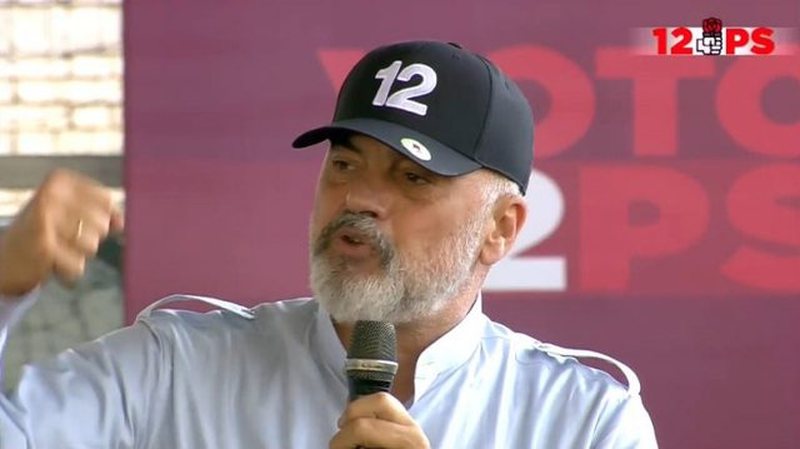 Prime Minister Edi Rama recalled the time when opposition leader Lulzim Basha was the mayor of Tirana and his promises.

Rama in Unit no. 1 in Tirana within the electoral campaign said that in 4 years Basha did nothing.

"New gates from the sea, from the sky, to bring many more tourists. To be able to associate with many more people willing to cover requests from various specialized professions. We are not talking about top scientists, but genuine Zantchins. More than a higher education, but have vocational education. I want, but this love is not desire, it comes from the depths of my soul. Coming from the depths of my conviction, I have very deep convictions. The sun of Albania should not shine only for tourists, not only for those who have them differently, but to shine for everyone. Erion mentioned a few things about what Luli did not do as mayor. I reminded you gentlemen in Librazhd, for you it is not a television story, it is the story of 4 years as citizens of Tirana. Ever since Basha came out in that race he promised mom and dad when they say, I remember two spectacular promises, the tram and the price of bread. His eyelashes did not tremble. Do the same today. I have come to see you face to face, in the bread shops, grabbing the bread, and saying I will lower the price and see them. He took it as he took it. He was taking over the Municipality of Tirana, his eyes did not see anyone anymore, because they were closed for sleep. What Tirana suffered was 4 lost years. Tirana began to return to the pits, garbage, schools, nurseries and kindergartens to the point of distress. Not to mention traffic. What does he say today? Lekë, lekë, lekë, lekë. He promises everyone money. With cars, with trumpets, with flags, lekë lekë, lekë. As I say job job job job. It is not difficult for those who were not small at all in those years, to remember the time when he was a Xhaferr, with trumpet cars, with people accompanying the caravan caravan, and waiting for him with songs, and said lekë, lekë. Xhaferri told him to give me 1, to give you 2. Luli tells him to give me 1 vote, to give you that much money. I will give you a house when you get married, thousands of euros as soon as you come out of your mother's womb. He does not give them any money, but gives them back two fingers in both eyeballs. Whoever promises a job, not by saying I will give him my own job by sleeping, but by working non-stop. Then when you have a job, money comes. When you go after the promise of money, no you have no job. Albanians have made mistakes several times, when they felt tired, exhausted, they felt on that road, there is Haxhi Qamili, he takes a road, go out where to go. We must make Albania a country that will be visited by so many people, and here there should be no part of this country, so that people with their work even at the top of the mountain, do not earn more than they would earn in emigration. It's possible, we need faith, time. Therefore, on April 25, we must continue with persistence for our future ", said Rama.