Izet Haxhia reveals the details of Azem Hajdari's murder: Before the assassination he was in Berisha's office, he was executed to overthrow Fatos Nano 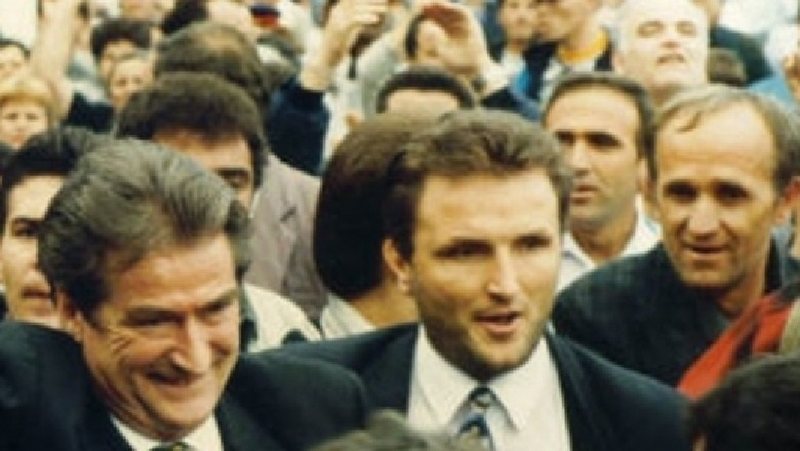 Izet Haxhia has given other details regarding the murder of former Democratic MP Azem Hajdari. On Tuesday the court decided to give him the floor to confess what happened on February 12, 1998, while he continued yesterday with the depositions. Sali Berisha's former bodyguard was sentenced in absentia to 25 years in prison as an accomplice in Hajdari's murder. He fled to Turkey after the incident and was then extradited to our country to serve his sentence. Judgment for him, starts from scratch and seems to be now towards the end. Once the final conclusions are given, the prosecution's claim is expected and then the decision. But in the statement given yesterday by Haxhia, it seems that he pointed the finger at former Prime Minister Berisha. He stated that Azem Hajdari was in Berisha's office before leaving the PD headquarters. Meanwhile, he stated that the purpose of the assassination was to overthrow the government of Fatos Nano. "I did not ambush Azem Hajdari. Before he was killed, Hajdari was in a meeting with Sali Berisha. Azemi was informed that outside the PD was a vehicle with tritol. When the councilor informed him, he was in Berisha's office. When he got out of the car, Azemi knocked on the window. Jaho Mulosmani was the driver of the car, he did not shoot. The shooter was Fatmir Haklaj. When the incident happened, I was with Halil Haklaj. Azemi and I were co-founders of PD. I felt very used. The assassination was done to overthrow Fatos Nano. "Fatmir Haklaj told me that he did not go to kill Azem", are some of Haxhia's statements. After Hajdari's assassination, the October 14 coup took place, where the Prime Minister was attacked and the RTSH building was taken, using Hajdari's assassination.

How Berisha escaped the testimony

Former Prime Minister Berisha was also wanted as a witness in Haxhia's trial, but the court prevented him. The Prosecution requested that Sali Berisha be called as a witness, as a person who has knowledge of the event. This is because he gave a testimony at the US embassy at the time. But the trial panel has stated that his testimony is not necessary. Berisha in several television studios previously sent constant messages to the court not to call him. The other element is that the court could not provide the testimony of persons who have knowledge of the event. The prosecution has requested the testimony of Zenel Neza, the person who was present when the murder took place. Neza was Azem Hajdari's bodyguard and was injured. The court also refused to call the former head of SHIK, Fatos Klosi and the Haklaj family as witnesses.

Izet Haxhia, a former officer of the National Guard, was sentenced to 25 years in prison for the crime of "murder due to duty". He was arrested on June 3, 2006 in the Turkish state, after being declared wanted for Hajdari's murder. His arrest at the time was made possible by a co-operation between Albanian police and Interpol Ankara at noon on June 3, in Kusadasi, Turkey. He lived in Istanbul until 2004, when he moved to Antalya, in Kusadasi, where he was arrested. He was later released and in 2018 the Supreme Court in Turkey ruled his extradition to Albania.

The battle at the blue headquarters, Agron Shehaj: I will tell you the two reasons for what Berisha's "Foltoret" have served

Why did Sali Berisha sink from the USA? Ramush Haradinaj bluntly tells the former prime minister: Do not declare war on America

Bylykbashi tells the conversation with Berisha after the loss in 2017: I asked him to leave ...

Ramush Haradinaj revolted with the EU: Incompetent and slow in resolving deadlocks in the Balkans

"Today thousands of democrats are vomiting bitterness", Kreshnik Spahiu greets "Rruga e Arbrit": If Ismail Qemali had known, he would have raised a flag Bardhezi, not Red and Black

The dismissal of the former Prime Minister, Doris Pack gives the strong message for Lulzim Basha: The USA decided to declare Berisha and his family 'non grata' without ...

Indrit Hoxha "slaps" Basha and Bardhi: One taken hostage, the other a former subordinate of Rama

Gazment Bardhi reacts harshly: This headline of this news is just a lie

Slovenian President calls for implementation of agreements reached: Kosovo-Serbia relations are important for the entire Balkans