The three draft laws that were on the agenda today, in the proceedings of the Assembly of Albania, were voted by a majority of votes. Thus, 96 MPs voted in favor of the three draft laws, while there were no votes against and no abstentions. 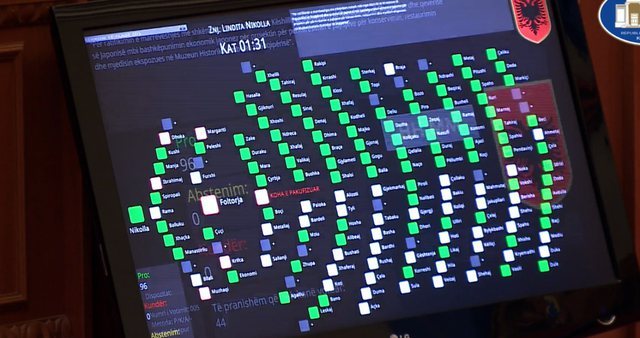 96 votes in favor and 0 against, approved by a majority of three votes

The first concerns the ratification of the agreement with the exchange of grades, between Albania and Japan; the second with the appointment of members of permanent committees in the Assembly; and the establishment of the Subcommittee on Environment and Agriculture.

- "For the ratification of the agreement with an exchange of notes, between the Council of Ministers of the Republic of Albania and the government of Japan, on Japanese economic cooperation for the project to improve equipment for conservation, restoration and the exhibition environment in the National Historical Museum of Albania" - 96 pro – Abstention 0 – Against 0.

- "For a change in decision no. 69/2021 "On the appointment of the membership of the permanent committees of the Assembly", amended - 96 in favor - 0 abstentions - 0 against.

- "On the establishment of the Subcommittee for Environment and Agriculture, as part of the Committee for Production, Trade and Environment" - 96 in favor - 0 abstentions - 0 against.