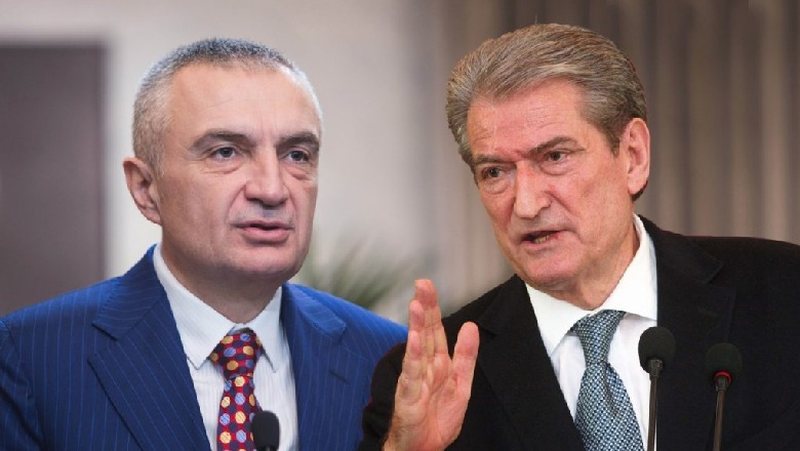 Sali Berisha and Ilir Meta, clothed in power since the beginning of democracy, despite the fact that they have often harshly accused each other, they have cooperated openly or secretly against the Albanians. After the publication of the file of the former president Meta as an associate of the state security, Berisha was among his most ardent defenders. The one who issued the most serious accusations against Ilir Meta is Sali Berisha. For Berisha, every time he touched the callus, Ilir Meta was "the stinking head of corruption", "Ilir gold", "orderer of the murders in Mali e Dajti and events in Tropoja, after the local elections of 2000", "instigator of the Policeman's strike", "attempt to kill a deputy", and thus for the danger he presented as Speaker of the Parliament, in a parliamentary session, he insisted on his resignation. Berisha, he should clarify what he said about Ilir Meta, or lick what he spat. As for Meta, Berisha was "the leader who ignores the institutions", "unscrupulous manipulator of the elections", "author of the construction of the pyramids and the burnings of '97", etc. But both of them have kept the main secrets that they knew about each other and that endangered their power. They have never accused each other of being collaborators of the state security, as it has long been stated about Sala with the nicknames "Medicine" and "penicillin". The cooperation of the two former heads of state, as prime ministers and presidents, has burdened the people and is criminally punishable. The two leaders who reached the highest levels of power have made the same forgery in their generalities: Berisha from Salih with "h" in Sali, also changing the date of birth, from July 1, 1944 to October 15, while Iliri sometimes adds and sometimes removes a "j" from his last name. Both of them from the predicament that occupied them, brutally returned to politics, Berisha, through the pulpits, snatched the head of the DP, while Meta, without properly cooling the President's chair, sheltered his head like an ostrich in the "Freedom Party." Both, like Berisha who was twice declared non grata and Meta as an associate of the State Security, have found Edi Rama guilty. Berisha, smeared from head to toe, asks to be presented with "even one single fact", while Iliri has discovered through a cartoon that the "son of Neta" once served Sigurimi. There can be no greater stupidity, when their supporters use the same thing as an "argument". Let them trace me back to when I was in kindergarten. With this low and amoral attack, Edi Rama tries to put into oblivion the executioner's signature of Kristaq Rama in the hanging of the poet Havzi Nela and the shooting of other innocent citizens. "- Meta declares. "Every accusation against Berisha is a slander of Soros and Edi Rama," declare the cowardly lecterns. Even a professor extends his appreciation for Berisha beyond any limit. According to him, "it is a big mistake that Albanians have not yet recognized that "Sali Berisha is not a person, he is a national and social idea. Sali Berisha is history." Edi Rama is never intimidated by such threats and alibi from former rulers who are now in the last throes of their political life. Both, when they try to defend their husband, that the spy with the initials IM, according to Berisha, is not Ilir Meta, but Ilir Murati, and according to Meta, "Berisha is like wine, the more time passes, the more democratic he becomes" instead of frowning, they roll their eyes as they do not bring any convincing facts to the Albanians. We ask: what if Meta and Rama were in an alliance, what would Berisha do?! That they are in close cooperation with each other is shown by the recent facts, when Berisha registered the candidates for the March 6 elections under the slogan of LSI, "House of Freedom", giving Berisha, among others, the honor who saved him from prison, when he was caught with the corruption block in hand. Others are "worried" about why Ilir Meta's file came out now! It doesn't matter. It is important to sift through the political past of these two main figures and others who have run the country for 32 years.

What a social "masterpiece" even ignorant (not knowing), but above all arrogant!

The party is blessed to have you as well, my Adriana!

Messages from prominent intellectuals for the article "The Voice of Intellectuals", published in the newspaper "Sot", dated October 13, 2015

Lies, as the favorite food of crowds

Courage and big words are not for the political "enemy", but for the fools in the crowd!

The mountain became pregnant, a mouse sowed it...

Why did Berisha and Meta not participate in the protest?

"Everything has a limit", people say

From the slogans on the microphone in September...

The more guilty they are, the more they justify...