Unbelievable but true VIDEO / 'Money rain' falls from the sky. The street is filled with thousands of banknotes, citizens disembark from cars to collect. The sights make the rounds of the world 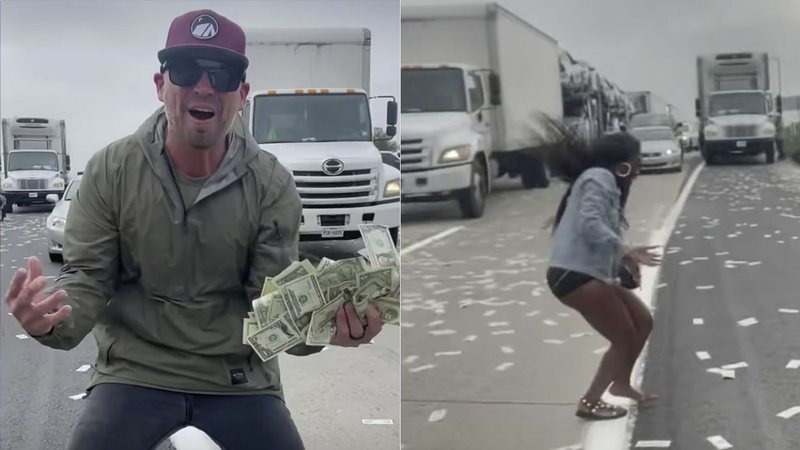 A "rain of money" from the sky suddenly started yesterday in California. What many could only have dreamed of came true.

Thousands of banknotes began flying from an armored money transfer truck moving on a highway in California on Friday, and drivers stopped their vehicles, coming out to collect as much as they could.

However, the joy of the drivers lasted a little, as the police quickly arrived at the scene to restore order, initially arresting two people.

"There are a lot of videos that show people stealing money from the street," California Highway Traffic Police Chief Curtis Martin told a news conference.

"The banknotes that fell from the truck are thousands of dollars, they belong to the bank and they have to be handed over to a police station," he insisted.

The "jackpot" happened when the door of an armored money transfer truck suddenly opened near San Diego, not far from the border with Mexico.

It was raining money on the San Diego freeway! @DemiBagby was there as cash scattered across I-5 in Carlsbad and shared this video. pic.twitter.com/jKQ5NYAhET

Videos posted on social media show drivers stopping their vehicles in the middle of the road and in the emergency lane and running to collect a few dollars. Police have warned that these videos will be used to find those who did not return the illegally collected money. Police on the spot arrested a man and a woman who rushed to get as much as possible.

Meet the 3 Horoscope signs that are very vindictive

"We are talking about two extreme situations ..." / The anxiety of December, astrology shows what will happen to the horoscope signs: You are in pretty difficult situations

They can not forgive even when they want to! Horoscope signs that carry resentment "all life"

If your partner turns into another man when stressed, it belongs to this horoscope sign

4 passionate zodiac signs that make life a dream for partners

Positive news / Daily horoscope prediction, discover the surprises that the stars have reserved today for your sign

Trials, success and meetings! Meri Shehu makes the prediction: These 3 horoscope signs will get super news

Nothing stops them and no one! 3 horoscope signs that are ambitious. Do you find yourself?

Avoid to the maximum, these are the 3 mistakes we make when decorating the holiday tree

Expect big changes, these 3 horoscope signs will surprise you this week

Stormy day will be Monday for those who are in a relationship, learn what the horoscope says about each of you

Be patient, the situation will improve next week! Learn what today's horoscope says about each of you