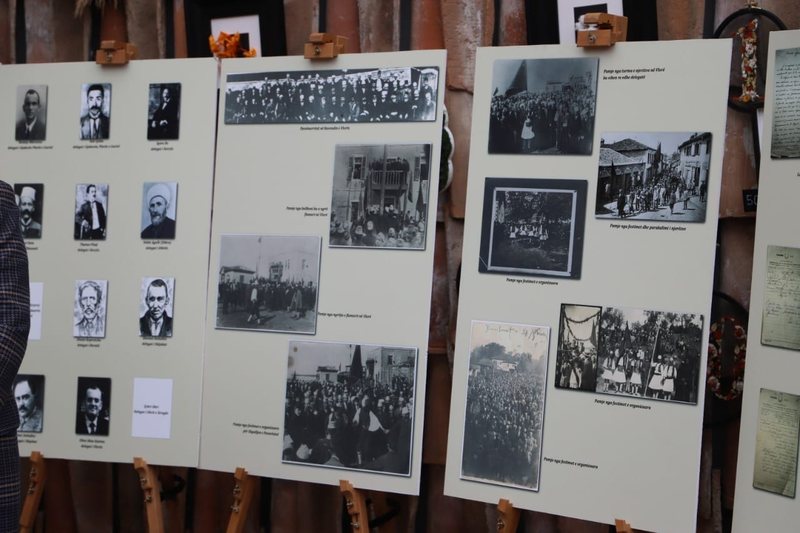 On this 109th anniversary of Independence, Flag Day, the exhibition "From November we come in November we go" was opened. The General Directorate of Archives together with the State Agency of Archives of Kosovo and the Ambassador of Kosovo Mr. Skënder Durmishi, through the exhibition says that they remembered the sacrifices that brought us to freedom. Kosovo Ambassador Skënder Durmishi, Director of Central Evidence and Communication at DA Elsa Saka, Chief of the State Agency of Archives of Kosovo Bedri Zyberaj and the administrator of the Tirana Castle Klodiana Toptani spoke at the opening ceremony of the exhibition at the Tirana Castle. Among the exhibited materials are documents of the beginnings of the anti-Ottoman uprisings before the declaration of Independence, announcements of the declarations of Independence of some cities of Albania, a short story about Ismail Qemali and Isa Boletini, as well as images of the signatories of Independence. Also in this exhibition were presented some photos of the celebrations after the declaration of Independence in 1912 and the activities, which took place after 1937 and beyond. Part of the activity were the dancers of the folk ensemble "Shqiponja", which according to DPA gave a colorful atmosphere to our national holiday. The proclamation of the Independence of Albania was the proclamation of the independence of the Albanian Vilayet from the Ottoman Empire. Independent Albania was declared in Vlora on November 28, 1912. Six days later the Assembly of Vlora formed the first government of Albania, which was headed by Ismail Qemali and the Council of Elders. The minutes after which the signatures of the envoys were arranged, which were arranged for the announcement were dictated by Ismail Qemali, was written in Albanian by Luigj Gurakuqi and later in Ottoman by Shefqet Dajiu. The document was later preserved by Lef Nosi, who made it available to an exhibition held on the 25th anniversary of independence in 1937.