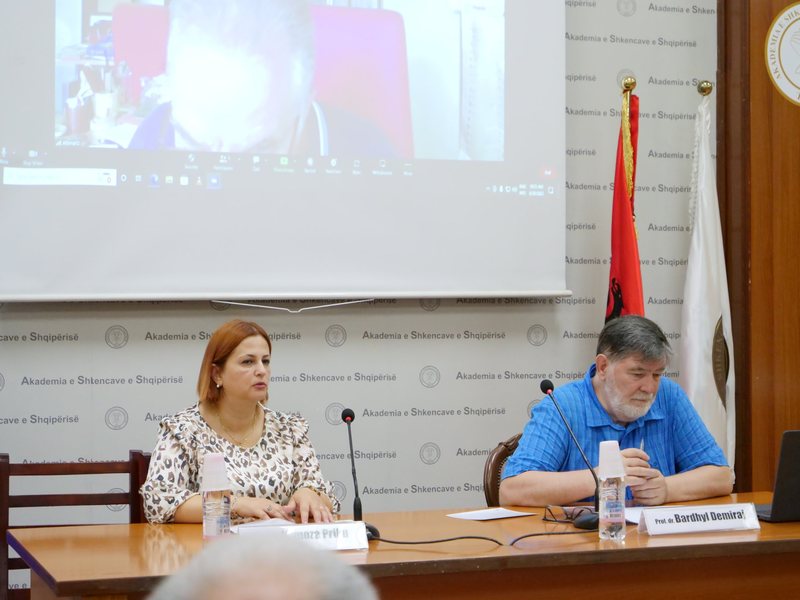 The Academy of Sciences of Albania, Section of Social and Albanological Sciences, on the 30th anniversary of the death of the writer and poet Martin Camaj held the scientific roundtable "Martin Camaj in the Albanian literary system". Academician Shaban Sinani in his speech states that Martin Camaj was the most important writer of the Albanian literary subsystem of the diaspora in half a century. "He is the forerunner of the published Albanian literature in Kosovo and its founder. "It remains a unique phenomenon in literature and researchers will have to work with it for a long time," he said, among other things. Acad. Francesco Altimari, prof. dr. Bashkim Kuçuku, prof. dr. Bardhyl Demiraj, acad. assoc. Stefan Çapaliku, prof.dr. Mimoza Priku, prof. as. dr. Evalda Paci, prof. as. dr. Viola Isufaj, dr. Belfjore Qose - Zifla, Ledio Hala, prof. dr. Blerina Suta, dr. Jolanda Lila, acad. Matteo Mandalà. Martin Camaj (Telum, 13 July 1925 - Munich, 12 March 1992) was an Albanian writer and albanologist. He is considered one of the main authors of modern Albanian prose. His novel "Rrathë" is considered as the first psychological novel written in Albanian. It is included in almost all anthologies and works, which talk about Albanian writers. Camaj's academic research focused on the Albanian language and dialects, particularly those in southern Italy. His literary activity in the 45-year span has several stages of development. He started with poetry, a genre to which he remained faithful all his life, and in recent years has focused heavily on prose. Martin Camaj started his poetic activity with the first two collections he published in Kosovo: "A flute among the mountains" and "Kanga e vërrinit". His first volume with the classic series "A pipe among the mountains", Prishtina 1953, and "Kanga e vërrinit", Prishtina 1954, were inspired by the inhabitants of the areas where he was born, the northern highlanders, after whom I am very close spiritually. after many, many years in exile and the inability to return. A selection of his poems translated into English by Leonard Fox in the volumes "Selected Poetry", New York 1990 (Selected Poems), and "Palimpsest", Munich & New York 1991.