"Square of Power", with the treatment of the problems of our society and the truths 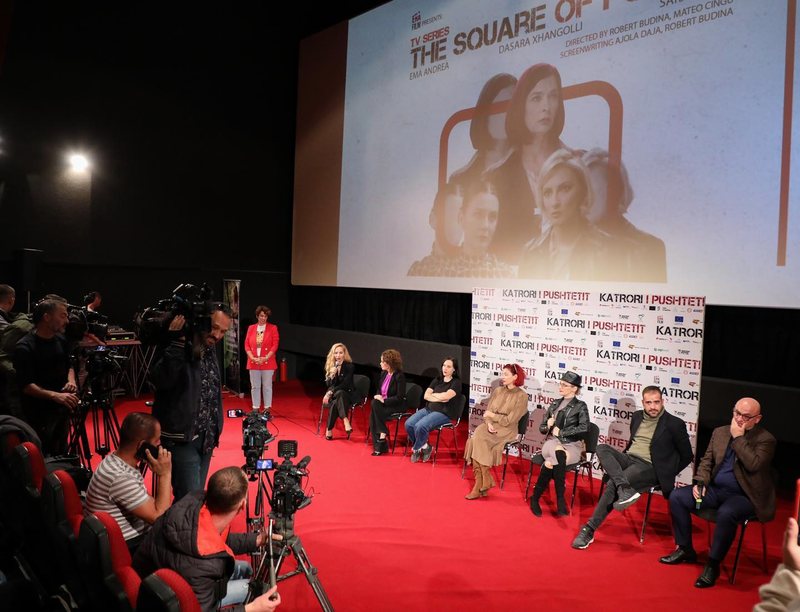 "Square of Power" is the newest Albanian series, dealing with the problems of our society. In roles with a cast of talented actors and directed by Robert Budina and Mateo Cungu. "The Square of Power" with a screenplay written by Ajola Daja and Robert Budina, a film with 8 series, shines a light of reflection on the future we want to have, bringing together the threads of interests that keep the media - politics - business and crime together. Two episodes of this series were shown at the Millennium cinema on Wednesday. Within this square of power takes place the great confrontation, between the consciousness for the fulfillment of a difficult mission of the journalist, the finding of the truth and the challenges for survival that the reality imposes. "Era Film" in co-production with SHUKA Studio Ltd, with EU funding and in partnership with the network "Equality in Decision Making" brings to the Albanian public an audiovisual production for the first time dedicated to freedom of media and expression. Producer Sabina Kodra said that this is a project that started two years ago when the call of the European Delegation in Tirana was opened, which had to do with independent journalism. "Certainly their support in this project greatly increased our responsibility. "The first to realize a long-standing dream of" EraFilm ", which was the realization of a film series", she said. Co-screenwriter Ajola Daja, among other things, said that many of the relationships that are in the series are personal relationships that have affected them, such as Nina's relationship with her father. In the screening of the first 2 episodes, director Robert Budina said that his professional and human experience, in the face of the power square mechanism, was the source from which he received the stimulus to confess concern as a creator, over how the power square manifests itself in our daily lives. "Beyond reality, this project aims to revive the belief that the media and journalism remain the only instrument to tell the truth in favor of the public interest without compromise," said Budina, among others.

Elva, in her fifties, Gentiana, 35, and Nina, 25, are three news television reporters who come together to shed light on three criminal events taking place in the country at the same time. In search of the thread that unites business interests with those of politics and the underworld, the three journalists will be exposed, each in his own form with dangerous consequences due to the profession. Their lives go through strong challenges, not only in career but also in family. In the film, the famous actress Ema Andrea comes with the role of journalist Elva. For the actress the characters of the movie always have something to join. "Elva passes not only my generation, but also a generation of journalists whom I have known, because my profession has connected me. What I like not only about Elva, but about every character is that they are not stereotyped, "They always have something where you can join, but it is also beyond you, which means they are the stories of these professions and professionals in all their perspective and without judgments," she says. In the roles of the film are Ema Andrea, Dasara Xhangoilli, Sara Smaja, to continue with the actors Neritan Liçaj, Romir Zalla, Gentin Zenelaj, Myzafer Zifla, Adriana Tolka, Ilirda Bejleri, Suela Bako, etc.