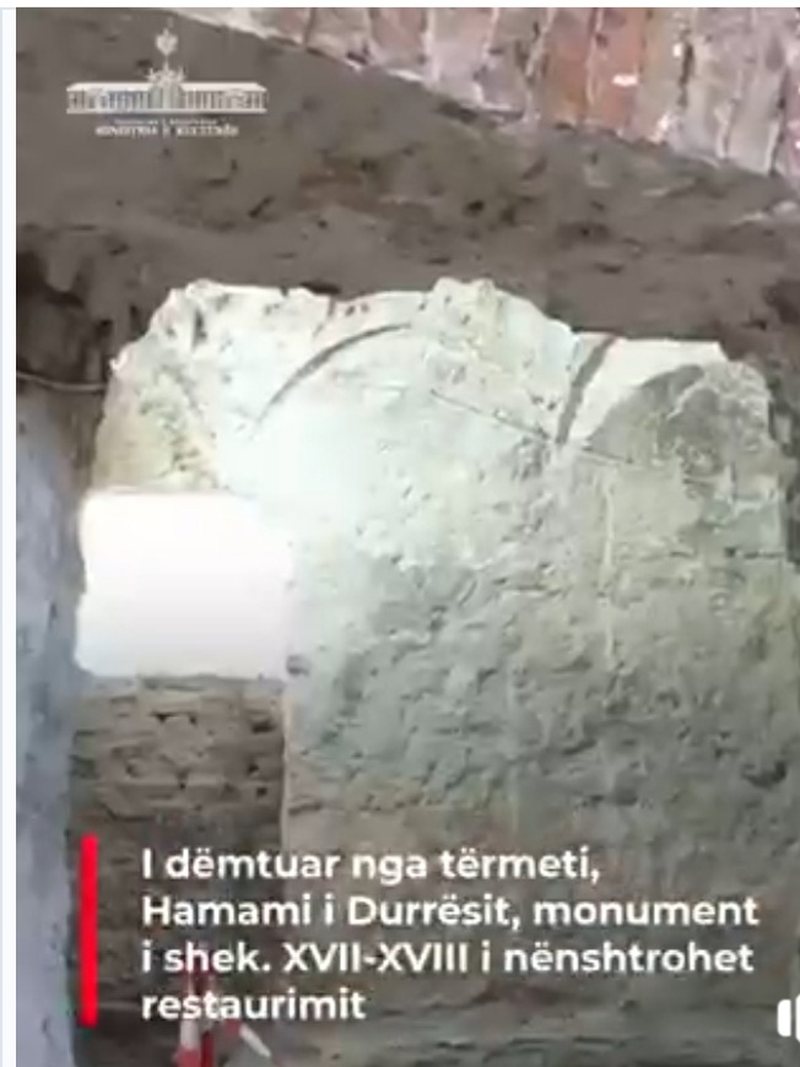 The old hammam of the XVII-XVIII century, a cultural monument of the first category in Durrës, was damaged by the earthquake of November 2019. But after the restoration, a digital element will be added to show the history of the object. This was announced by the Minister of Culture Elva Margariti, who inspected the works being carried out in this cultural monument in our country. The minister says, among other things, that the revival of the old hammam in Durrës is being made possible by the "EU4Culture" program and implemented by UNOPS. "The old hammam is turning into another tourist spot in Durrës. The 2019 earthquake also left behind damage in this century building. XVII-XVIII. After strengthening the structure, restoration, re-flooring, the digital element will be added to tell the history of the object. This revival is made possible by the "EU4Culture" program, implemented by UNOPS", writes the Minister of Culture on Facebook, while showing the work being done in the medieval hammam through a video. The "EU4Culture" program is financed by the European Union and implemented by UNOPS in close partnership with the Ministry of Culture. With a budget of 40 million euros, "EU4Culture" extends throughout the territory affected by the earthquake of November 26, 2019, with planned interventions in a number of cultural heritage objects in the country.

Work in the cultural monument facility

Hamam (bath) is a public building with typical architecture of the Turkish period. It was built in the century. XVIII in the southeast corner of the medieval city. In the center there was a spherical dome with a height of 5.8 m, equipped with 12 small windows for ventilation. The premises were heated with steam through ceramic pipes. The oven is located at the back of the hammam. It was badly damaged, so it was reconstructed in 1980. Earlier, the "EU4Culture" program announced that the interventions included the restoration of interior surfaces, facades and installations for digital interpretation. The EU program "EU4Culture" previously shared some images of how this facility will look after the planned works. The Hamam in Durrës is one of the few surviving examples of public architecture from the 18th century. The "EU4Culture" program website states that its rehabilitation offers the opportunity for visitors to become more fully involved in the history of historical lifestyles in Durrës, as part of the "connected heritage" approach. The interventions proposed for the rehabilitation of the site, in relation to the "EU4Culture" project, included the preservation of the surfaces and the restoration of the original purpose of the space, the restoration of the missing elements of the bathroom use functions, the partial structural stabilization and drainage, the railings around the authentic elements which would be the focus of an exposure, disaster risk management and maintenance program and plans. In the infrastructure, the electrical installations for lighting, the surveillance and security system, the ticket office and information related to the Venetian Tower, etc. Object of revival: Classical interpretation by means of panels, friction panels in brass structures and similar tools; interactive interpretation of the history of the hammam connecting it to similar baths and nearby baths; digital interpretation of the history of the baths in Albania (for different time periods), etc.