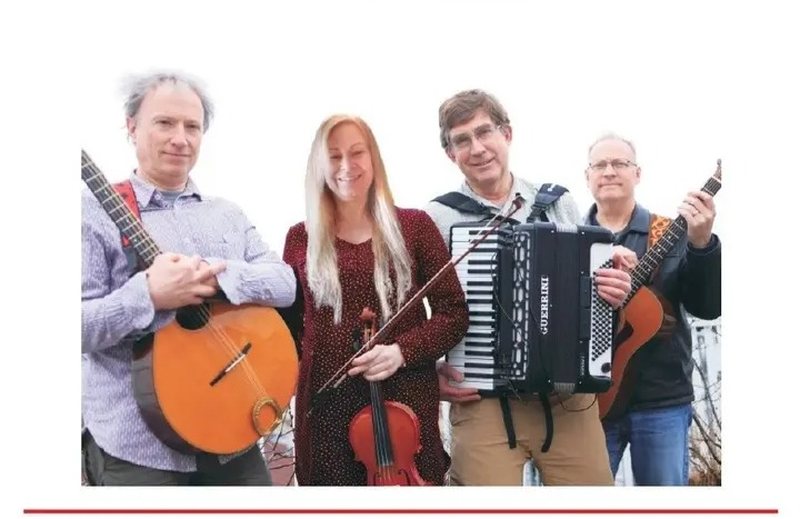 The group "Duncreagan", a concert at the Academy of Sciences, as part of the 50th International Conference of Scholars of the ballad "Ballads and the Audience in Time and Space", which will be held on September 1-6. A concert organized by ASH and Thomas McKean, the former president of the International Ballad Commission / "Kommission für Volksdichtung" / "International Ballad Commission" / "Commission internationale pour l'étude de la chanson populaire". The performers of the group "Duncreagan" brought their lively style of Celtic music to Tirana this week. The veteran trio of Tom McKean (vocals, bodhrán, buzuk), Carrick Eggleston (accordion) and Kelley Bishop (guitar, mandolin, accordion) is joined by Sara Reith, a talented and flutist violinist from Scotland. Known for their unusual songs and exciting melodies, Duncreagan's repertoire includes Scottish ballads, tragic love stories, "oral music" and Galician songs, accompanied more by the simple and old instruments of traditional folk music, which enable musical performances from slow marches and melodies. The leader of the group "Duncreagan", Thomas McKean in the press conference the day before expressed the pleasure of organizing this concert for the first time in Albania. "I have known Albania before from folklore. While studying folklore, I also studied the ancient history of the Albanian people. I am very pleased that Albanian songs will perform here along with traditional songs ", said Thomas McKean a few hours before the concert. Present at the conference, academic Shaban Sinani said that the 50th International Conference of Ballad Scholars has a special significance for the scientific research of tradition and cultural heritage. "The conference will shed light on the dimensions of recognizing the creativity of modern times and its products, as part of folklore and tradition," he said. The concert was divided into two parts.