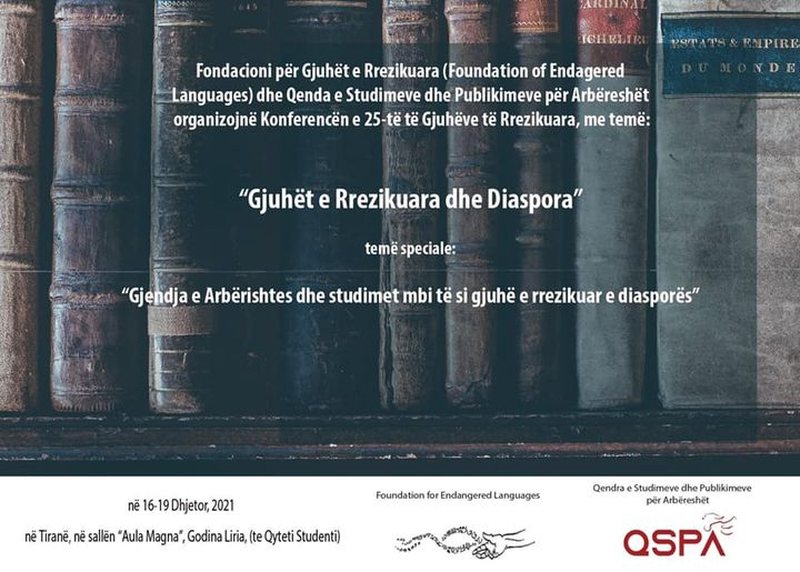 "Endangered languages ??and the diaspora" is the title of the international conference in Tirana, where a great deal of attention will be paid to a sharp problem, previously not addressed in academic form of this size: "The state of Arbërisht and studies on it as a language endangered diaspora ”. The Center for Studies and Publications for the Arbëresh announces that the conference will take place from 16 to 19 December. QSPA states that the conference "Endangered Languages ??and Diaspora" is held regularly every year by the Foundation for Endangered Languages ??(FEL) in cooperation with the best universities and scientific centers in the world and this year marks its 25th edition. "In this jubilee year, the Center for Studies and Publications for Arbëresh (QSPA) has been officially selected as the host institution organizing this conference, which is recognized as one of the most important international conferences. As a result of the cooperation between the Foundation for Endangered Languages ??(FEL) based in London and the Center for Studies and Publications for Arbëresh (QSPA), from 16-20 December 2021, for the first time in Albania Tirana will gather 50 scholars, "Academics, sociolinguists and linguists from different countries of the world, starting from Europe, Asia, America, New Zealand and Australia", writes QSPA. The selection of the Center for Studies and Publications for the Arbëresh and Albania as the host country for the 25th edition, is a golden opportunity to return attention to the in-depth study of the Albanian language and culture in the international arena.