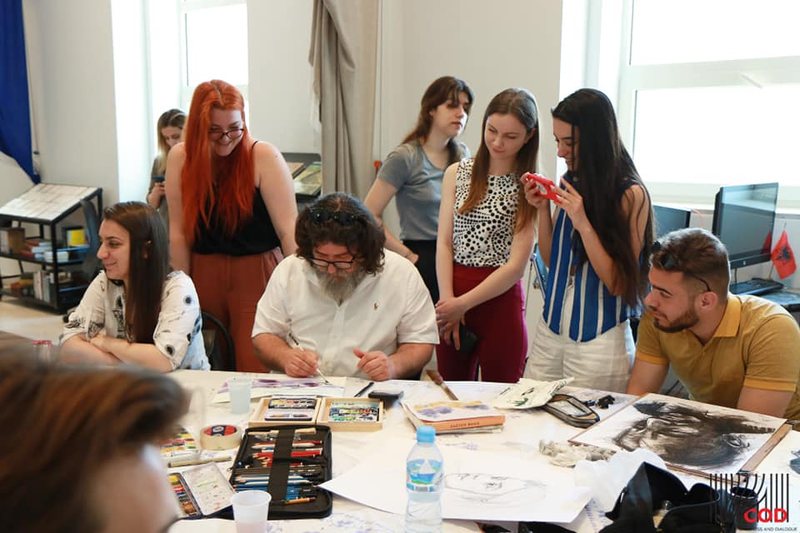 COD was transformed on Tuesday into a space dedicated to the young artists of the International Festival of Contemporary Art "Rin-VIZ-Art". Under the direction and curation of painter Helidon Haliti, talented young people performed live throughout the COD space in various genres such as painting, graphics, watercolor, sculpture, video art and performance. Foreign and Albanian visitors joined this event and were involved in the extraordinary atmosphere that only art knows how to give. Curator Helidon Haliti says that the festival comes as inspiration from a call of the National Youth Congress, which does many activities, because Tirana is the capital of youth. "VizArt" participated in this application and came out the winner. We have been working for over 4 or 5 months and we have invited and conceived that some European schools are represented among themselves, to face each other, to compete with each other, but also to stay in harmony with each other. The main schools are the University of Arts of Tirana with over 60 students participating, it is the Academy of Arts of Venice with about 8 students, it is the school of Kosovo that comes with about 10 students, it is Northern Macedonia, Greece, Finland, France, Bulgaria and more "After many countries around the world joined the call of" VizArt "and applied, a total of 200 artists are made", says the curator Helidon Haliti. According to the curator Haliti, the festival is operating successfully since its opening with two exhibitions, at the Tirana Art Gallery that opened on the morning of May 16, and the other exhibition that opened in the afternoon at the National Historical Museum. "The exhibition at 11:00 had an extraordinary impact on students, continued at 18:30 in the NHM, where I saw a sea of ??students who occupied both halls that exhibited, were honored. To continue in the COD center, a very prestigious gallery that has opened all its doors and halls ", he said before. The festival organized by "VizArt", supported by the National Youth Congress in the framework of the program "Tirana European Capital of Youth 2022", brings days full of activities in Tirana, where all lovers of art and beauty are getting acquainted with the most works good of local and foreign artists.