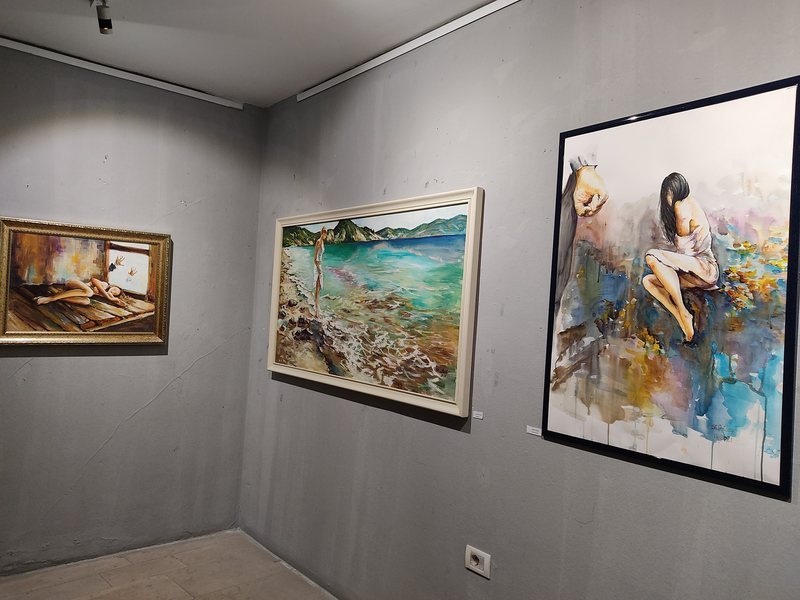 The works of artists in an art exhibition in Durrës, focusing on combating and preventing gender-based violence. The exhibition opened at the Nicolet Vasia Visual Art Gallery. The exhibition features the works of painters Alketa Tragaj Myshketa, Elio Bajramaj, Aseli Kryemadhi, Bledar Kurti, Bajram Sallaku, Marjana Goxhabelliu, Arben Kristani, Shpresa Milaq Bajko, Dorina Sula, David Kryemadhi, Florian Bregu, Jonil Çelo, Franc Priska. The exhibition was made possible by the OSCE Presence in Albania, in partnership with the Municipality of Durrës and the Cultural Center "Aleksandër Moisiu". On the website of the Cultural Center “A. Moisiu ”it is said that this activity was organized in the framework of 16 Days of Activism against Gender Based Violence, the annual international campaign that started on November 25, International Day for the Elimination of Violence against Women and lasts until December 10, Human Rights Day. As in previous years, the OSCE Presence in Albania is celebrating 16 days of activism through various activities, as it is fully engaged in the fight against all forms of gender-based violence. The Deputy Head of the OSCE Presence in Albania, Clarisse Pasztory, at the opening ceremony of the exhibition said that there is no better way than art to symbolize the positivism, hope, stability, strength, beauty, intelligence and creativity needed to fight gender-based violence. "Violence against women and girls threatens the security and well-being of the community, not only hindering the possible participation of women in promoting a democratic society. "but also being a serious threat to human rights and freedoms," she said. The OSCE Presence in Albania, supported by the Municipality of Durrës and the library, also held an awareness-raising training on women's safety in the lobby of the "A. Moisiu" Cultural Center with the participation of Durrës girls and women. According to this center, this training aimed at addressing the specific risks and security threats that affect women the most.