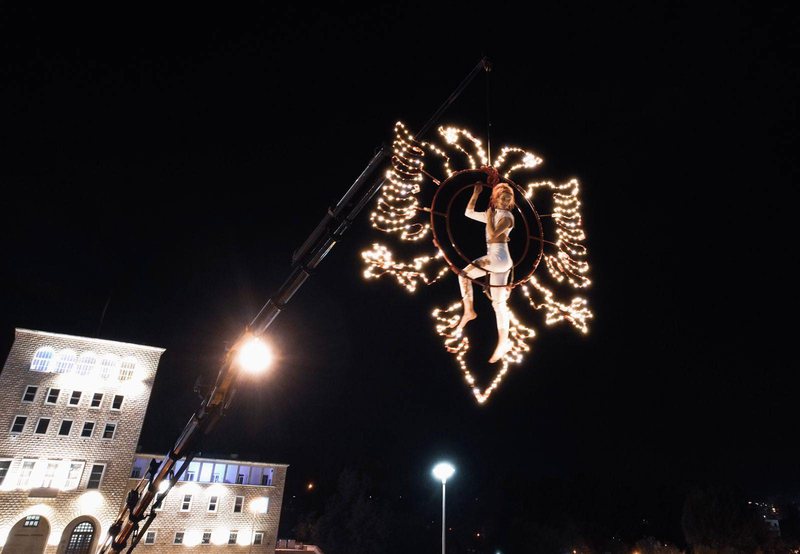 Acrobat Fiona Rushiti donated a special performance for Flag Day. Known for her activity for years, during these holidays, acrobat Fiona Rushiti chose to raise the "eagle" at "Mother Teresa" square in Tirana. Artist Rushiti this time for Flag Day came up with a performance with all the colors and symbols red and black, sitting on the double-headed eagle. But for the acrobat Rushiti, the realization of this performance has not been easy. "I wanted this November 28 to come as an eagle of Albanians, as well as to show the values ??and beauty of our flag. For me this will be one of the most special, and most beautiful performances because it started just as an idea. It was very difficult to prepare it, I had so many obstacles on the way that I thought it would be impossible to do it ", shows the famous acrobat who donated to the public this performance. On Flag Day in Tirana, a performance that received praise, but the acrobat Fiona Rushiti says that through it she conveys messages for our society. "The best message is not to forget who we are and where we come from, not to forget the language, culture, traditions and values ??we have as a nation," she said. Before the November holidays the acrobat in her reactions had warned her that she would come up with a special performance on Flag Day. Fiona Rushiti, a talent discovered at a very young age, with passion and dedication has managed to succeed. It has been continuing for several years with its activity in Albania, but also in Kosovo where it has received many awards. An artist with spectacular performances in different countries, which even without the help of institutions has managed to have a valued activity. The promotion of our cultural heritage has also received attention in its activity. Butrinti, cultural monument bridge, castle, etc., are some of the choices of the famous acrobat Fiona Rushiti where she has performed.