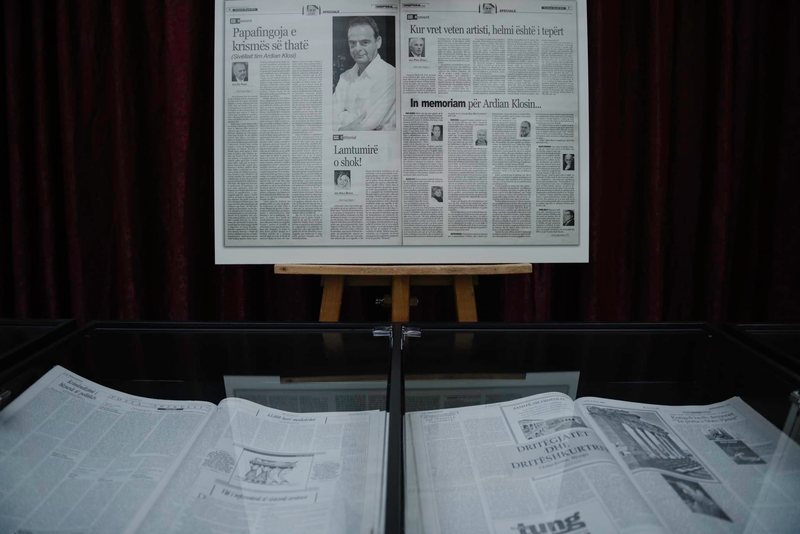 The National Library opened the exhibition "In Memoriam" dedicated to Ardian Klosi. Present at the exhibition were Prime Minister Edi Rama, Minister of Culture Elva Margariti, director of the National Library Piro Misha, as well as friends and relatives of Ardian Klosi. Minister of Culture Elva Margariti said that Ardian Klosi was one of the prominent personalities. "For those like me who knew Ardian Klosi from afar, he was undoubtedly the uncompromising intellectual, one of the prominent personalities of the Albanian translation, a refined selector of titles, who brought among us authors of the century. XX, about whom before the '90s it was impossible to talk and not to read them anymore ", says Margariti. For the Minister of Culture, Ardian Klosi was one of the prominent figures of journalism. "Sometimes bitter, but with a clear goal in the democratization of Albanian thought, especially when it came to the demolition of idols. Full 10 years after his separation from life, we miss the civic and intellectual opposition of Klosi, with his restrained nature, but with a sharp pen. "We commemorated him at the National Library among friends, through his work, sculpted in an exhibition" In Memoriam ", which also represents his being and mission", Margariti claims. Ardian Klosi (Tirana, July 9, 1957 - April 26, 2012) was a publicist, translator, opinionist and activist. He graduated from the Faculty of Language and Literature in 1981 with a thesis on translation by Dickens and Thackeray. From 1981 to 1986 he worked as an editor and translator at the publishing house "Naim Frashëri", translating authors such as Th. Mann, S. Zweig, H. Böll, M. Twain et al. He brought masterfully in Albanian the complete summary of the work of Franc Kafka in short prose, as well as the work "The Castle", translating them from German after a long work. In the translations we also mention "With the eye of a clown" by Heinrich Böll; "Adam and Evelina", by Ingo Schulze; "The Lost", by Hans Ulrich Treichel; "101 love poems", by Bertolt Brecht, etc.