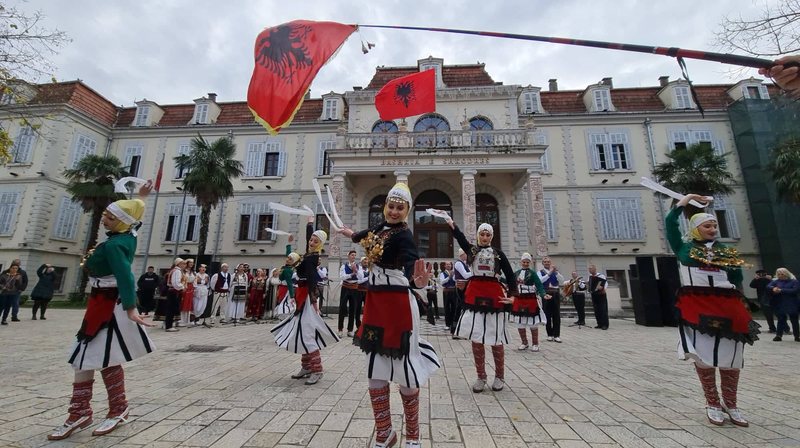 The National Ensemble of Folk Songs and Dances is traveling to different cities to celebrate the holidays of flag, independence and liberation. The first concert took place in the city of Shkodra on November 25, to continue today in Prizren at the Palace of Culture, where the guest participates and Shkurte Fejza "Grand Master". AKKVP artists will be in the city of Vlora for the concert, which will take place on November 27 in the square of the historic center. Artistic director Sokol Marsi says that these concerts are intended with a rich musical program and take place in the morning, for the public to celebrate. "As part of Flag Week, the People's Ensemble holds concerts in the three capitals of independence. In Shkodra, Prizren and Vlora. The concerts are at 11 o'clock: 00 in the morning because the People's Ensemble this time goes to the squares together with the public celebrating ", said the artistic director Sokol Marsi after the concert, which took place in the city of Shkodra on Thursday. Regarding these concerts he says that the program is intended in a patriotic spirit. The first concert took place in the city of Shkodra on Thursday, where the artistic director Sokol Marsi says that he was welcomed. "The program is built with the most beautiful songs and dances with patriotic and patriotic themes. The dance group, the choir, the polyphonic group and the group "Artists of the Future" at the Folk Ensemble participated. The dances "Festë e Madhe" and "Vallja e Shqipeve", as well as the songs "Kaçaniku shkëmb e gurë" and the collage with patriotic songs were received with applause. At the end of the concert the audience became one with the artists,

The National Ensemble of Folk Songs and Dances is continuing its activity with various concerts for the public. Artistic director Sokol Marsi, under whose direction a rich musical activity is taking place, says that there will be other following concerts by the Folk Ensemble. On the weekend we will be part of the concert "Rrok'e agimin" which takes place in the hall of the National Theater of Opera and Ballet with music repertoire from the National Liberation War. But then we will continue with the concert in "Skënderbej" square with "Artists of the Future" and at the end will be the gala concert on the occasion of the New Year called "Happy weather!", Says the artistic director Sokol Marsi. The National Ensemble of Folk Songs and Dances (AKKVP) was established in 1957, as a professional ensemble. This ensemble consists of singing soloists, orchestra, dance group and choir. The purpose of AKKVP is in the processing, development and dissemination of the folklore treasure of Albania. This includes the great folk vocal, instrumental, choreographic and costume riches, which vary from area to area, creating a colorful motif.