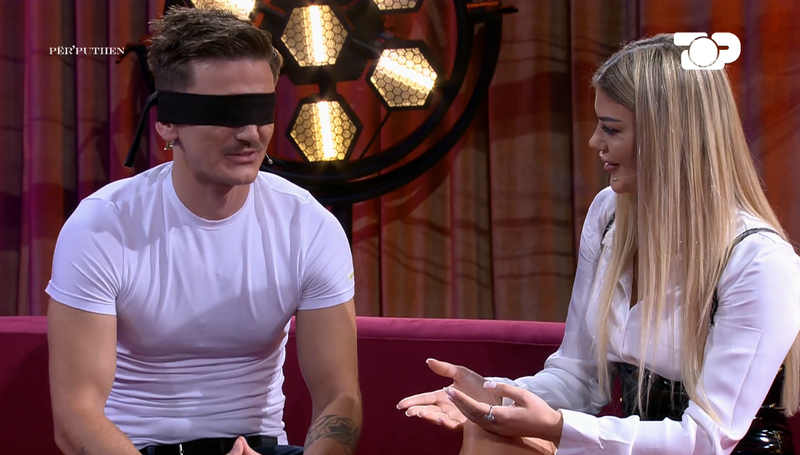 Jeroani started the meeting with Ilda in the studio very awkwardly and for this reason, Neda came to his aid.

The competitor was excited next to Ilda and was feeling in a difficult position from her questions. Neda went and sat next to him and began to guide him and tell him what he should say to the girl he likes.

"Hello, I have a lot to give you, unlike these who are used to oil and vinegar", said Neda, words that Jeroan then repeated.

"I think you are a chick who needs to be treated well and get back your opinion about men, even about those from the south that you say you don't like very much", he said further.

But, Ilda was prepared and after taking a black ribbon, she blinked at Jeroan, becoming even more provocative for him.

At the end of the meeting, the competitor said that he would feel honored if Ilda agreed to hold a meeting outside the studio.

Habit, the well-known Albanian singer: I have a friend with my ex-husband, before I came to the show we were together

"Break relationships with people ...", Horoscope for tomorrow, learn what the stars have in store for you

What is happening among colleagues? Alketa Vejsiu speaks with gloves: Everyone in the Klan is complaining about us, Fevziu, Gjebrea, Magjistari have sent us letters

Alketa Vejsiu said this evening on "Dance Albania" that many managers of shows o...

Why have you postponed the wedding for so many years? Armina Mevlani surprises with the answer: The fault was...

Armina Mevlani recently had a virtual conversation with her followers on social ...

"I risked breaking my spine, it would have been fatal for me"/ The former Big Brother competitor risks the life of his partner on the stage of Dance Albania: Alcohol was to blame

Barack and Michelle Obama have celebrated their 30th wedding anniversary by givi...

Stresi makes the unexpected announcement to the fans: This will be the last concert...

As he has posted one of the concerts he will hold this month, the well-known r...

The end of Mercury's retrograde seems to have somewhat freed the horoscope signs...