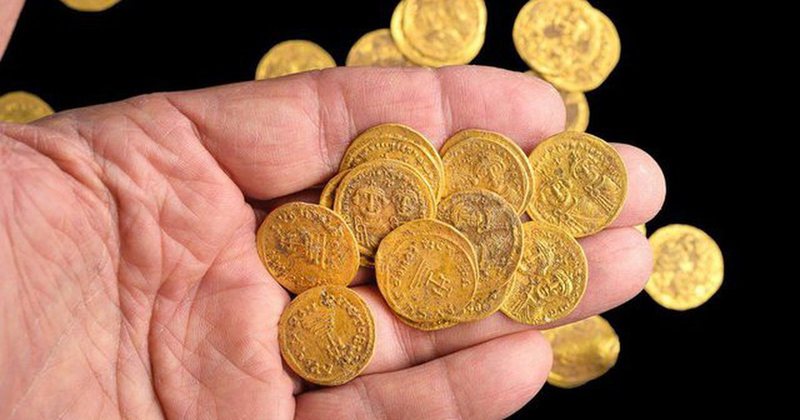 Archaeologists in Israel say 44 pure gold coins dating back to the 7th century have been found hidden in a wall. Weighing around 170g, the treasure found at the site of Hermon Stream (Banias) was hidden during the Muslim conquest of the area in 635, experts estimated.

They said the coins shed light on the end of Byzantine rule in the area. The Byzantine Empire was the eastern half of the Roman Empire, which survived for more than 1,000 years.

"We can imagine the owner hiding his wealth at the threat of war, hoping to return one day to retrieve his property," said Yoav Lerer, director of the excavation.

"In retrospect, we know he was unlucky," he said.

In addition to the gold coins, the excavation in a residential quarter of the ancient city also revealed remains of buildings, water channels and pipes, bronze coins, Israeli authorities said.

Dr Gabriela Bijovsky, a numismatist (coins) expert at the Israel Antiquities Authority, said some of the coins belonged to the emperor Phocas (602-610), but most belonged to his successor Heraclius.

Banias has a special place in Christian tradition, being the place where Jesus is said to have said to the apostle Peter, "on this rock, I will build my church", writes the BBC.

The well-known journalist, Adi Krasta, has received the citizenship of Kosovo Al...

Catherine Ommanney has recently opened up about her one-month relationship with ...