The 9-year dominance of Juventus is broken, Inter is declared the champion of Italy 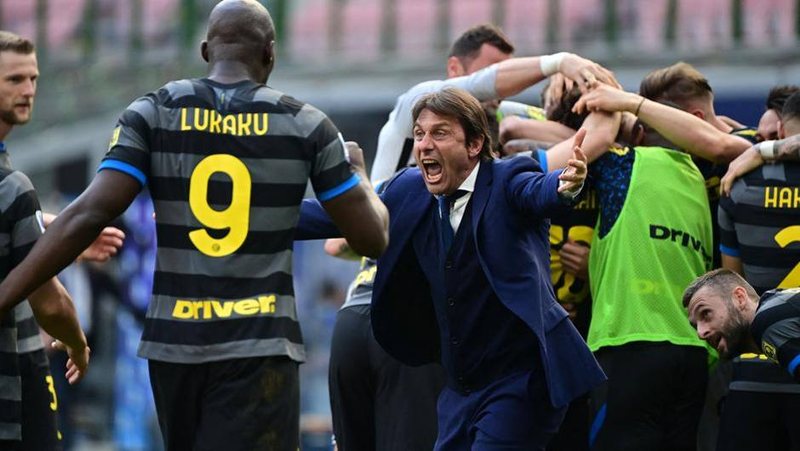 There are no more dilemmas in the Italian Serie A as far as the winner is concerned. Thus, Inter is officially declared the champion of Serie A one day after the 2-0 success in the field of Crotone. The Zikaltri took advantage of Atalanta's 1-1 draw at Sassuolo to start the title race, breaking Juventus' 9-year hegemony. If the Bergamo team would win against Sassuolo, they would simply postpone the celebration of Conte's team, but the challenge in "Mapei" did not bring out a winner. Two goals were scored, two red cards were awarded, one for each team, and Muriel missed a penalty, but in the end the happiest were the players and Inter fans. Goalkeeper Golini left Atalanta in numerical inferiority in the 15th minute, however the first to score were the Bergamas with Gosens in the 32nd. Seven minutes from the start of the second fraction, Berardi restored the balance to the result with 11 meters, while in the 64th Locatelli's goal was canceled by the VAR system for offside position. Atalanta won the penalty in the 75th minute with Marlon being penalized with the second yellow card, but Muriel missed from the penalty spot. Nothing changed in the remaining minutes, with Atalanta losing quite a bit of advantage in the fight for the Champions zone, not taking advantage of Napoli's stoppage against Cagliari, a meeting that ended 1-1. Unforgivable for Napoli what happened at the "Maradona" stadium, where until the 4th extra minute Gatuso's team led with Osimhen's goal, scored in the 13th minute. When it was thought that everything was over, Cagliari equalized with Nandez, then there was no time for the locals to score another goal for the victory. Rodrigo Palacio was the hero of Bologna in the spectacular 3-3 draw against Fiorentina in the duel between two teams that have not yet secured survival in Serie A. Three times the purple team took the lead, but just as many times turned the balance in the result of the Argentine veteran. Vlahovic stood out with two goals in this match as well (the first with 11 meters), while between the two finals of the Serbian striker for the Tuscan team, Bonaventura scored. Meanwhile, one of the most exciting matches played yesterday in the Italian championship was the one between Lazio and Genoa, which had 7 goals but Lazio won with great difficulty 4-3. Of course, the winner was Lazio who got a lot of success in the race for a place in the Champions zone. Until 10 minutes before the end of regular time, everything turned out to be easy for the white and blues, who dominated with the game and the result. Jacqueline Korrea and Ciro Imobile scored from the penalty spot in the first half for Lazio, while Marusic's own goal in the first seconds of the second half seemed to reopen the challenge, but soon Luis Alberto with a super goal and again Correa raised the score to 4 -1 in favor of the capital. But Genoa had not yet said the last word and Shomudorov's Scamacha in the 80th and 81st minutes scored two quick goals making the last minutes thrilling for Lazio who nevertheless managed to maintain the advantage of one goal and took three points golden.

Manchester United-Vilareal, the grand final of the Europa League

Sadiku in trouble, Bolivar fans demand the departure of the Albanian

Fearing for favors and abuses, FSHF decides that the last 4 rounds in Superiore be played at the same time

Laçi the best team at home, Partizani the most balanced club of the season

Great news for Elseid Hysaj, Shkodra gets the attention of Real Madrid

SCANDAL / The football player bleeds the referee of the match, escapes from the bathroom window, the stadium is 'armored'

Finally a GREAT news for all sports fans

There is no end to the problems for Iker Casillas, the former goalkeeper is urgently hospitalized / What happened to him?

City wins the duel of the "sheikhs" in the Champions League with PSG, in the final Guardiola team

Bajrami climbs in Serie A, Cikalleshi in the 11th of the week in Turkey