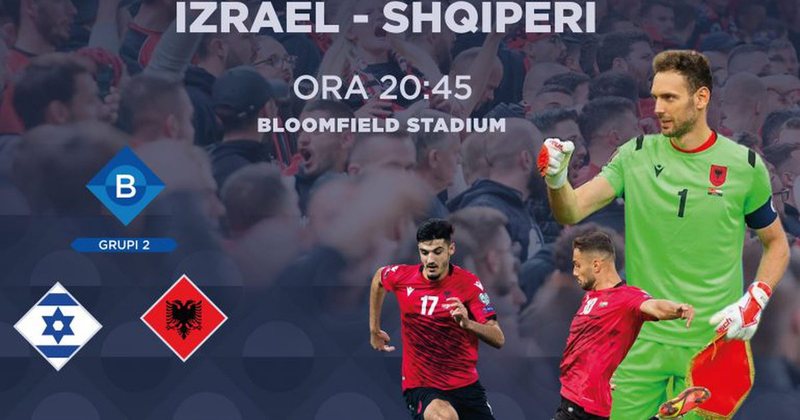 Albania will play tonight in the evening, perhaps one of the most important matches after the one against Poland in the World Cup qualifiers. The Reds will try for victory in Israel, to go very close to first place in the Nations League group.

The atmosphere is very good, while the stadium will be full in the evening as there is great interest in watching the match from local fans. Meanwhile, the red and blacks will be rewarded with a prize of 10,000 euros for each player in case of victory.

HEADLINERS - Only striker Myrto Uzuni has trained partially in differential mode due to a muscle problem and the medical staff has yet to decide whether he will be ready for today's challenge. Meanwhile, as for the starters, Reja has tried to start with this lineup:

Tomas Strakosha, who won the duel with Berisha, will play in goal. In the center of the defense Ismajli and Veseli, while on the wings, Balliu on the right and Hysaj on the left.

Gjasula, Abrashi and Laçi are expected to line up in front of them, however there is a doubt that Kristjan Asllani can also start in his place. While in his role of fantasist is Nedim Bajrami, who will support the two attackers, Armando Broja and Sokol Cikalleshi.

CHANCES – The two remaining matches of the Albanian National Team against Israel and Iceland in the League of Nations are of great importance. If the first place in the group was reached, many things would be simplified for Albania.

In addition to climbing a league higher in the next Nations League tournament, where the confrontation would be with a giant national team (more income from marketing), Albania can receive very important benefits in terms of qualifying for the 2024 European Championship. -s, which will be held in Germany.

VASO AND "PLAY OFF" - Always if we talk about the first place in the group we are in, the chances are great that in the European draw, which will be held in Frankfurt, we will be placed in the second Vase and not the third, because the division of the Cups is done according to the order that the teams keep in the League of Nations.

The first 4 places of League A or C will do the same, and Albania can do the same in League B if they win the group. Thus, each league will draw the winner of the group that will go to the "play off" of "EURO 2024".