Decisive goal of Asan, Partizani takes the head of Superiore and puts a "hand" in the title 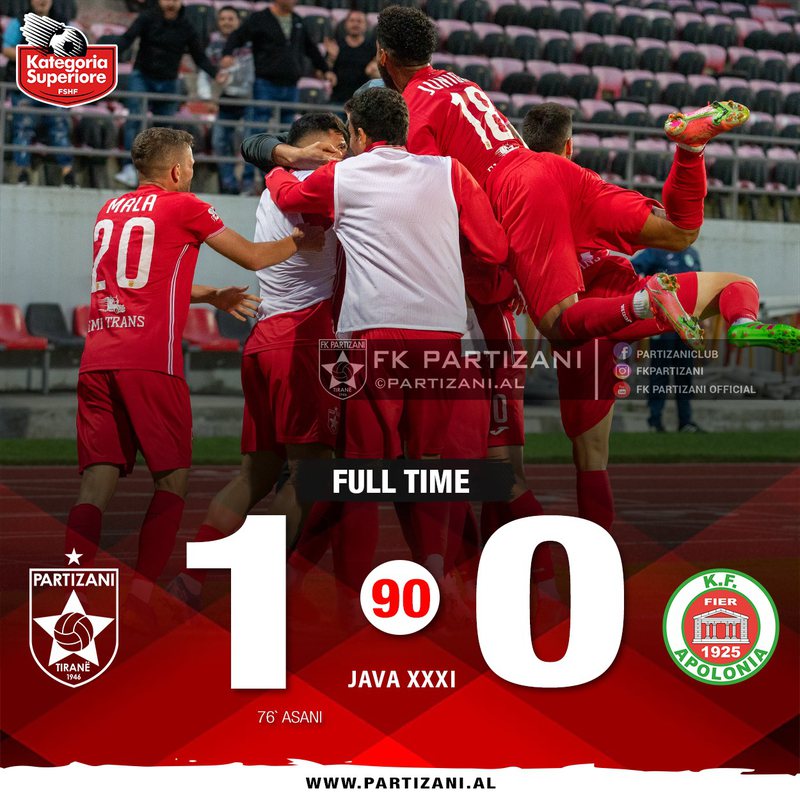 The 31st week of the Superior category closed yesterday and there was a big winner. He is Partizan, who thanks to a minimal 1-0 victory against Apollonia, with a decisive goal by Asan in the second half, secured a three-pointer that climbed to the top and makes the red team the main contender for the title. In the first part of the match, Partizani completely dominated the match, wanting to quickly resolve the goal issue, but the Fier team was placed quite well in the background, covering the spaces well and being at the required height in the defensive phase of the game. But it must be admitted that Partizan was also unlucky in this fraction of the game and almost the first half of the second half, where the ball was not said to go into the net. In football, above all else, the result is valid and the result is provided by the goal. This thing became a nightmare for the reds yesterday in the duel played in Elbasan against Apolonia. In the second half, Partizan exerted an ever-increasing pressure, in search of a goal and succeeded in the 76th minute, through Jasir Asani. It was a long action, where the "wedge" Junior was aimed, he turns his head and some partisan players appear at the borders of the area. The ball follows nicely for Asan, who in half-height and flight, face to face with the goalkeeper of Apollonia, hits hard and shakes the net. The enthusiasm in the red camp is huge. The goal was a psychological liberation for the reds, who started to manage the game in the remaining minutes, this and the fact that Apolonia, in conditions when there was nothing to lose, jumped forward to equalize the figures. But the "bulls" were not afraid, on the contrary, they managed the game and the result properly,

The uprising of the 31st week of the Superior Category, played yesterday at the stadium "Loro Boriçi" between local Vllaznia and Teuta, ended with white figures 0-0. Shkodra starts the match nicely, in the 5th minute, with Marku on the left and the midfielder finds Imer the only one in the area. But the latter misses everything by throwing the ball out even though alone in the area of ??the Durrës team. Incredible case lost by the people of Shkodra. In the 8th minute Teuta loses the Arab for injury. The defender signals that he can not continue and leaves the field in Kuros field. For more than 10 minutes in a row, Teuta keeps Vllaznia in the Shkodra half, not giving him a chance to organize the game. Anyway, in the 27th minute, from a corner kick for Vllaznia, the cross in the area starts towards Dilaver, but the Durrës defense is impassable in the game in the air. 10 minutes later, in the 38th minute, Tenton Vllaznia risks a penalty kick on the right wing of the attack, the ball is arched in the center for Gurishta who shoots the ball with his head, the pro does not find the quadrangle. The first half closes 0-0. In the second half, Teuta increased the attacking level. Thus, in the 52nd minute, Bregu tries to score with a front free kick, but the ball is deflected over the crossbar by the defensive wall. Flagrant case for Vllaznia in the 57th minute, Imeri errs again with the empty gate. Da Silva on the left wing crosses well into the second post where Imeri shoots on the go, but does not find the quadrangle, although a few steps away from the goal. In the 64th minute, Imeri misses everything in a counterattack from the right, as he does not follow for Dilaver, but releases a light shot that Frashëri controls. This forced coach Berdaric to replace the attacking players (Imer and Dilaver) with Kruja and Jonuz. The attacking game of Vllaznia gets "fire", where the whole team jumps forward to find the winning goal. Technicians Martini and Berdaric make the last moves on the bench in the last 5 minutes, moves that tried to win, but the result remained unchanged, closing 0-0, with one point for each team, a result that directly favored Partizan who took the lead. race.

Manchester United-Vilareal, the grand final of the Europa League

Sadiku in trouble, Bolivar fans demand the departure of the Albanian

Fearing for favors and abuses, FSHF decides that the last 4 rounds in Superiore be played at the same time

Laçi the best team at home, Partizani the most balanced club of the season

Great news for Elseid Hysaj, Shkodra gets the attention of Real Madrid

SCANDAL / The football player bleeds the referee of the match, escapes from the bathroom window, the stadium is 'armored'

Finally a GREAT news for all sports fans

There is no end to the problems for Iker Casillas, the former goalkeeper is urgently hospitalized / What happened to him?

City wins the duel of the "sheikhs" in the Champions League with PSG, in the final Guardiola team

Bajrami climbs in Serie A, Cikalleshi in the 11th of the week in Turkey