Japan 'made a name' on the field, what it did in the dressing room is surprising the whole world (video) 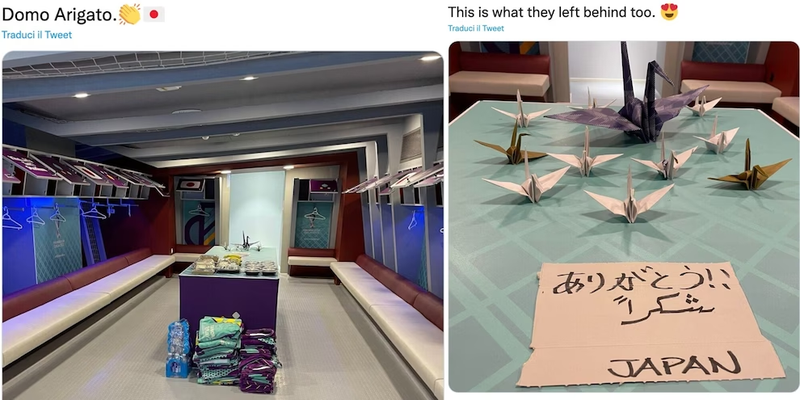 Incredible Japan not only for the victory on the field against Germany, in the first match of this World Cup for both teams in question. The fans stood out for cleaning the stands after the match and celebrating the victory.

The images soon went around the world leaving people speechless. But that's not all. In fact, the Japanese team also left the dressing room with honor, after a super celebration for the victory over the Germans (2-1).

After their shocking win against Germany, Japan fans stayed after the match to clean up the stadium.

In fact, this is nothing new, because the Japanese national team has already taught us such things, but this time the players have outdone themselves. Besides having left everything neat and clean in the dressing room, where they were rightly lost in the joy of victory, the stadium cleaners found paper "origami cranes" on the table.

In Japan, the "crane" is considered a symbol of many good things, such as happiness, peace and long life. "Cranes" in this case were compositions made by folding sheets of paper very skillfully. And so they appeared on the table in the center of Japan's dressing room, like a bunch of "babies" with their "mother" in the center.

After an historic victory against Germany at the #FIFAWorldCup on Match Day 4, Japan fans cleaned up their rubbish in the stadium, whilst the @jfa_samuraiblue left their changing room at Khalifa International Stadium like this. Spotless.

The gesture of the Japanese players quickly reached the ears of FIFA, who wanted to honor Nagatomo and his teammates by publishing a note on their official Twitter profile:

"After a historic victory against Germany on the fourth day of the World Cup, Japanese fans cleaned up the rubbish in the stadium, while the players left the dressing room of the 'Khalifa International Stadium' spotless. Domo Arigato (thank you, in Japanese)".