The "saboteur" who is putting pressure on the KLP for the new head of SPAK is revealed, Yuri Kim solves the riddle of the game against the Reform in Justice 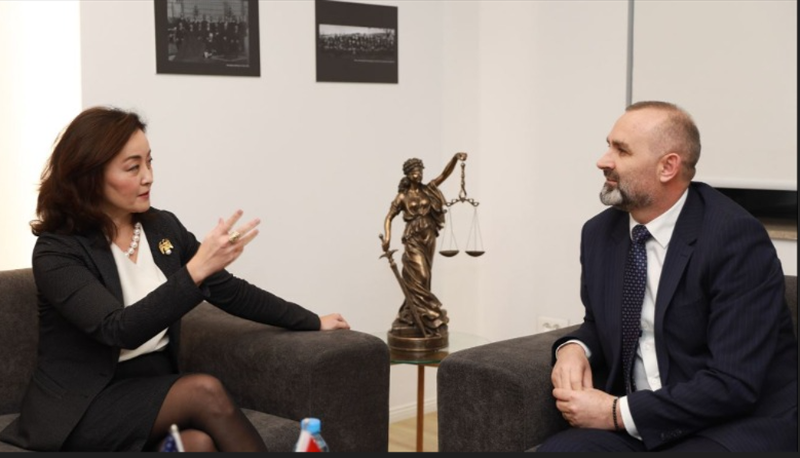 The process of electing the new head of the Special Structure Against Organized Crime and Corruption seems to have increased the appetite of Albanian politicians and governors, who are moving all the stones behind the scenes to capture this vital institution for justice and which holds the fate of integration in its hands of the country and high officials involved in corrupt and criminal affairs. This week the High Council of Prosecution has started the verifications for the candidates who will compete for the head of SPAK, where according to KLP, Adnan Xholi, Altin Dumani and Edvin Kondili meet the legal conditions to continue the race for the head of the Special Prosecutor's Office Against Organized Crime and Corruption . Two days ago, the ambassador of the United States of America in Tirana, Yuri Kim, reacted to this process. which sent a strong message to interest groups and actors involved in the process of electing the new head of SPAK, to be transparent, as according to her, the US is watching them. But as less than 24 hours had passed since this statement, Ambassador Kim made another move, going to the Ministry of Justice, as she met with Minister Ulsi Manja. The news of this flash visit was shared by the American embassy in Albania itself on social networks, where the message is clear that politics should keep its hands off the new justice. The newspaper has learned that the United States of America, as the biggest promoter and supporter of justice reform, has sympathy for one of the candidates, who meets the conditions to be the new head of SPAK, because he is immaculate and trained in the USA . But sources from the majority affirmed that Minister Manja is also in the game, who seeks to capture SPAK through another candidate who is part of the race to own Arben Kraja. Manja has been accused earlier by the opposition of intending to capture and control the Special Structure Against Organized Crime and Corruption, through his friend the special prosecutor, Altin Dumani. So this "vice" of Manja, as it has worried the Americans, has been set in motion to block these scenarios and attempts by the majority to put their hands in the justice system. But in addition to the opposition, the journalist Poli Hoxha also stated yesterday that Minister Ulsi Manja is one of the politicians who openly interfered in SPAK. He said this yesterday in an interview with the media, while commenting on the statement of the US ambassador, Yuri Kim.

Meanwhile, details about Mrs. Kim's visit were also provided yesterday by the US Embassy in Tirana. "Yuri Kim met yesterday with the Minister of Justice Ulsi Manja to review the progress in the implementation of the justice reform and its importance for Albania's aspirations in the EU. The ambassador again emphasized that President Biden in June 2021 identified the fight against corruption as an essential interest of national security because it threatens security, economic equality, development and democracy. The meeting precedes Minister Manja's participation in the 20th International Anti-Corruption Conference (IACC) in Washington, DC, December 6-10," the US embassy announced on Twitter. Two days ago, the US ambassador, Yuri Kim had a message about the elections for the new head of SPAK, saying that the process should be transparent and without manipulation by those who want to influence justice. The three candidates for the head of SPAK are Edvin Kondili, Adnan Xholi, Altin Dumani who, according to KLP, meet the conditions to enter the competition. The new head of SPAK is elected at a time when not only the international community but also the public demands results, arrests of high officials implicated in corruption and members of organized crime gangs.