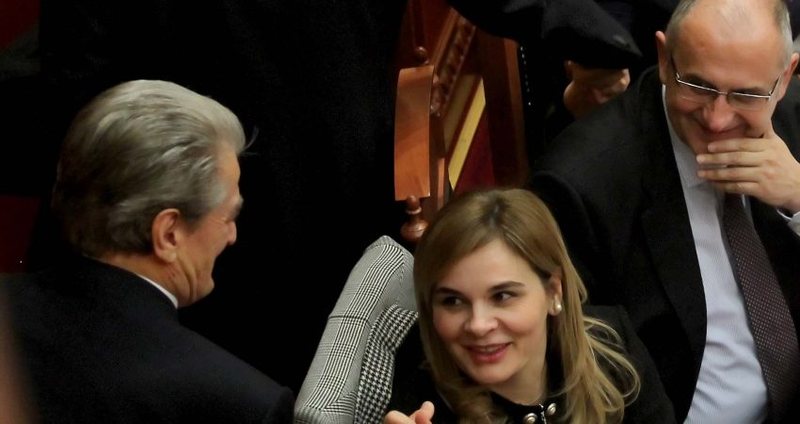 President Ilir Meta and former Prime Minister Sali Berisha continue to strengthen the front against Prime Minister Edi Rama, as yesterday began preparations to develop a motion against the head of government regarding the European integration process. More specifically, the PD Re-establishment Group and the Socialist Movement for Integration harshly attacked Prime Minister Edi Rama for the statement given in an interview in Brussels two days ago that if Albania does not open EU integration negotiations within this year, he will change our country's diplomatic course on how to seek the separation of our country from Northern Macedonia regarding the issue of opening EU membership talks. 11 deputies of the political alliance between former Prime Minister Sali Berisha and the chairwoman of the SMI and the wife of President Ilir Meta, Monika Kryemadhi has considered scandalous, shameful and malicious the words of the head of the socialist government as it hits the Euro-Atlantic approach of our country. For this reason, they have sent a request to the Speaker of the Assembly, Lindita Nikolla to convene Parliament to hold a debate with Prime Minister Edi Rama to confirm our country's aspirations towards a United Europe. "Prime Minister Edi Rama today (yesterday) in Brussels said: 'Meanwhile, I believe that everyone is clear that this situation can not continue any longer. However, we will immediately change course, as we have said and as we have received from the National Council in case our country does not move to the next stage to formally sit at the negotiating table '. We as members of the Albanian Parliament, we find this statement of Prime Minister Edi Rama scandalous, shameful and malicious, to the detriment of the European future of Albanian citizens. "We are deeply concerned, based on Article 98 of the Rules of Procedure of the Albanian Parliament, we are submitting this request for an URGENT debate motion in the Assembly regarding these anti-European and dangerous statements of Prime Minister Edi Rama in Brussels", is initially written in the request sent to the Presidency of Assembly.
SMI-'Foltore ': Parliament to convene on Monday
Considering Albania's membership in the EU as issues of vital importance for Albanians, the 11 deputies of the SMI and the Re-Establishment Group of the Democratic Party ask the Speaker Nikolla to convene in a faster time the Conference of Presidents to decide on Monday in May 16 to hold an extraordinary session in Parliament for debate. The Kryemadhi-Berisha opposition aims for the Albanian parliament to confirm the continuation of the path towards EU membership. “Article 98, point 2 of the regulation requires the meeting within three days of the Conference of Presidents by the Speaker of the Assembly to set the date of the motion in the plenary session. But, since these are issues of vital importance for all Albanian citizens, we request from you an URGENT meeting, within Friday, 13.05.
Here are the names of 11 deputies seeking a debate with Rama in the Assembly
3 deputies of the SMI and 8 of the Re-establishment Group of the Democratic Party who have signed the request for a motion with debate in Parliament with Prime Minister Rama are: Monika Kryemadhi, Petrit Vasili, Erisa Xhixho (SMI); Sali Berisha, Albana Vokshi, Flamur Noka, Tritan Shehu, Oerd Bylykbashi, Edi Paloka, Edmond Spaho and Belind Këlliçi (PD Re-establishment Group). Following the March 6 by-elections, Kryemadhi and Berisha are strengthening co-operation and fighting against Edi Rama and the SP. President Meta has promised that after the end of his presidential term on July 24, he will join the opposition against Rama. We recall that "Foltorja" has held elections in the branches of the Democratic Party and the National Council and is preparing for the election of a new leader, where in all likelihood is expected to return to Sali Berisha. SMI and Kryemadhi on the other hand will hold the Assembly of SMI on July 25, a day after Meta leaves the Presidency. Yesterday's move clearly showed that the new opposition is getting even stronger.

"Meta does not worry in vain", the well-known journalist warns of trouble for the president and shows the message: Here is the key witness who can destroy him

"Meta the post of President for his purposes", the well-known lawyer comes out with a strong statement

Berisha threatens the courts and accuses Yuri Kim of taking over the party, the Appeal reacts

The second round for the new president will be held on May 23, the official SP and PD sit today at the negotiating table, Duma criticizes Alibeaj, while Balla attacks Meta