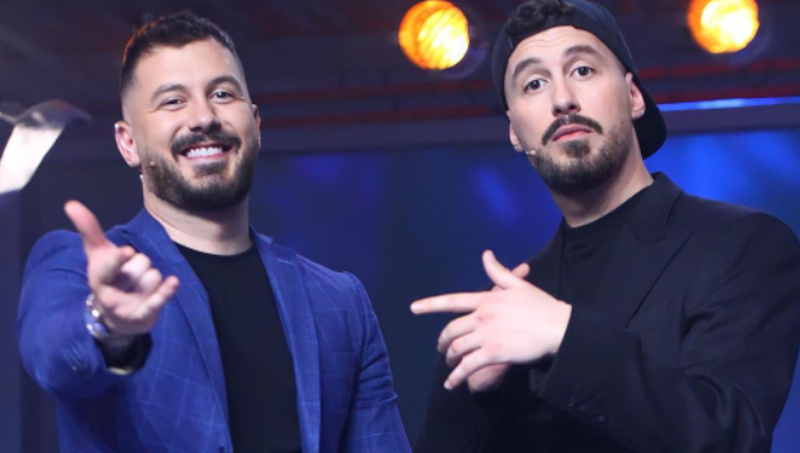 Donald and Romeo Veshaj have ironized all those who go to Dubai after the sensational scandal.

In a sketch in today's episode of "Let Me Talk" they did not spare the stings for the characters who seem to be obsessed with Dubai. Donald said he wanted to rest and with jokes and irony, they brought to attention the so-called "Dubai Porta Potty".

Donald: I want to go somewhere. I have a few vacations left. Thailand, Egypt and Dubai.

Donald: D… Divjakë. After Dubai. You heard that expression "Habibi come to Dubai". It's the perfect place to relax I'm heard.

Romeo: Who will I lead? Who will keep you? That I know the salary. You have no money to go there. Do you play billiards? Who will you run away with.

Donald: I'm leaving with some friends, they're bobe they're cool.

Romeo: But there you can not pay being cool. What do these deal with.

Donald: They are unemployed but we will be happy. I was told that I would only stay a few days because they had little work to do. They were out of work and found work. I was told they would do acne treatments.

Romeo: What Donald treatment that took my brain.

Donald: A micodermo-abrasion with zinc. I had done it too. Men also need to be taken care of.

Romeo: But, not hours go by to eat Dubai's traditional food. There is no connection.

Donald: When I get there I will bring traditional food from dubai.

Romeo: They do not go there in vain. They go for (make gestures) them I say 100% you will work in the toilet. You have it for sure.

According to the Urban Dictionary, they are "bought" by rich Arab and European men for 30,000+ and participate in "yacht festivals". On the yachts it is said that the horrible practices mentioned above occur. And when all this remains a rumor, which can hardly be taken into account as long as more credible evidence and investigations are lacking, there are many people who have taken it into consideration and launched accusations against well-known Albanian girls, mainly those who often visit Dubai.