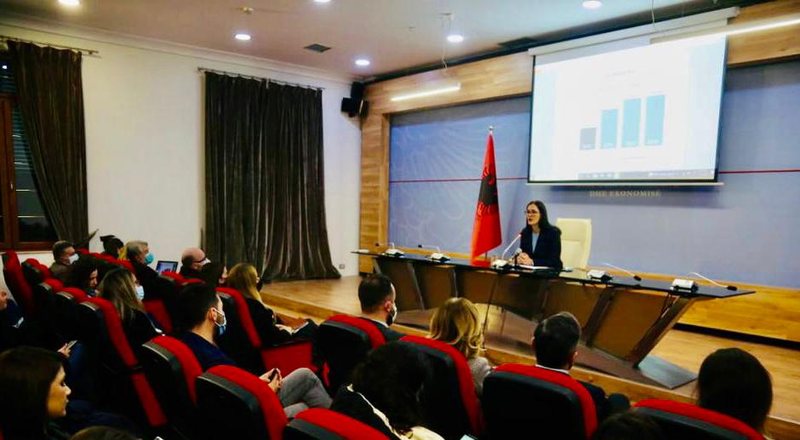 The government has decided not to impose any fines on businesses that have had delays in fiscalization. The Minister of Economy and Finance, Delina Ibrahimaj during a conference said that until July there will be no more fines, but this is the deadline. Ibrahimaj said that control will be exercised only by high-risk businesses, while commenting on the wage scandal. The Minister of Economy said that taxes have started to take measures while adding that businesses are expected to make a reaction to the salaries that are under-declared. "Within 2022 we expect to successfully complete the fiscalization reform. There will be no fines until July 1 and this is the deadline. VAT refund, we have managed to zero the VAT refund stock. We aim for automatic reimbursement and change of the reimbursement regulation where 80% of businesses will receive it without undergoing a control that has been the cause of delays and dissatisfaction. Only high-risk businesses will exercise control. In 2020 taxes managed to increase by 30% declarations. "Due to what happened with the salaries, the taxes have started to take measures and the sending of more than 10 thousand letters has started, we expect the businesses to make a reaction on January 20 for those salaries that are under-declared", said Ibrahimi .

Business inspections will begin in March

The Minister said that in the framework of the informality initiative, the analysis of the level of salaries declared by taxpayers will soon begin. Ibrahimaj stated that in March, the controls in businesses will start for the whole year and according to her, these controls will identify the subjects that commit evasion. "In the initiative against informality, we will start analyzing the level of salaries declared by taxpayers, by professions and sectors. Evaluation of data filed by taxpayers, identification of taxpayers and individuals who create reasonable suspicions of real non-declaration of employees, exercise of controls and communication with taxpayers. In March, year-round business audits will begin. We can not determine the salaries of private entities, therefore there can be no reference wages. "The elements that will be used to identify the entities that commit evasion, will be based on the salaries that the market has and how much they are declared", she said. Regarding the plans for 2022, the Minister of Economy said that the fiscal policy that will be followed this year will have the focus on reducing public debt. She said that the goal for this year is to reduce the debt to 78.8%.

The minimum wage is increased

Ibrahimaj also stated that the minimum wage will be increased in July, adding that the issue of price increases will be carefully considered to intervene later. "During 2022 we will pursue prudent fiscal policy aiming to reduce the level of public debt which is at very high levels. For 2021 the debt is 80.1% which is a very high level. We aim to reduce the debt to 78.8% this year. The fiscal package for the progressive tax change will take effect on July 1, 2022. Taxes have been working since 2019 on informality in wages. The minimum wage will increase on July 1, 2022, from 30 thousand to 32 thousand. Inflation of 3.7% is high, but it must be seen. Prices will continue to rise in the first 6 months of this year. "We will look at them carefully and think about intervention," she said.