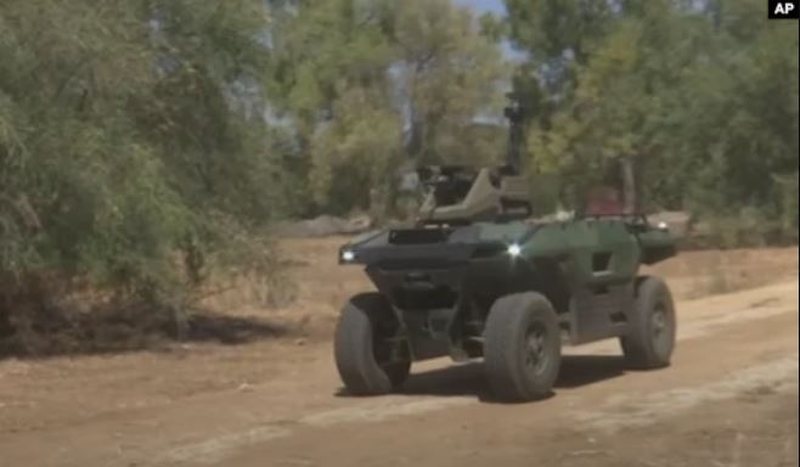 The use of military drones has increased significantly in recent years. The Israeli firm IAI, known for the production of remote-controlled aircraft, is currently demonstrating an autonomous ground combat vehicle, which can accompany troops in battle, or perform remotely controlled missions. This remotely controlled combat machine will be part of the open arms trade fair in London on Tuesday.

The Israeli state firm IIA is exposing a ground-based remote-controlled vehicle, which experts say could be used to support troops in a variety of combat situations.

The combat vehicle, called the REX MK II, is a remotely controlled robotic vehicle and can carry a payload of up to 1.3 tonnes, says Rani Avni, deputy chief of the IAI firm's autonomous systems division.

"For many years we have provided remote controlled air equipment. "We are now bringing these skills to the battlefield, combining artificial intelligence with other technologies to provide a ground combat vehicle."

Armed with firearms, the military robot is remotely controlled via a tablet.

"The military machinery is completely remotely controlled by a central command. "Having a clear picture of the situation on the ground, the vehicle also has full autonomy to carry out the mission independently", says Mr. Avni.

The company, he says, is using its artificial intelligence capabilities to develop these robotic systems.

"It offers us a wide range of capabilities for various missions, both robotic and autonomous, adding value to the battlefield of the future."

Mr. Avni says that the REX vehicle serves, among other things, to reduce the risk of troops on the battlefield.

"Some parts of the battlefield are dangerous. "So this robotic machine will precede troops to clear the front line, control roads in urban areas, or transport ammunition to soldiers."

He says the vehicle has the capabilities to find the target and open fire. However, the vehicle is programmed in such a way that the final decision is made by man.

The REX MK II vehicle has electric motors and high maneuverability in different terrains, as well as can make narrow turns. This combat vehicle, which has combined artificial intelligence with remote control capabilities and firearms, is being unveiled at the London International Arms Fair. / VOA

Chaos at gas stations, quarrel with knives between drivers for little gas (Video)