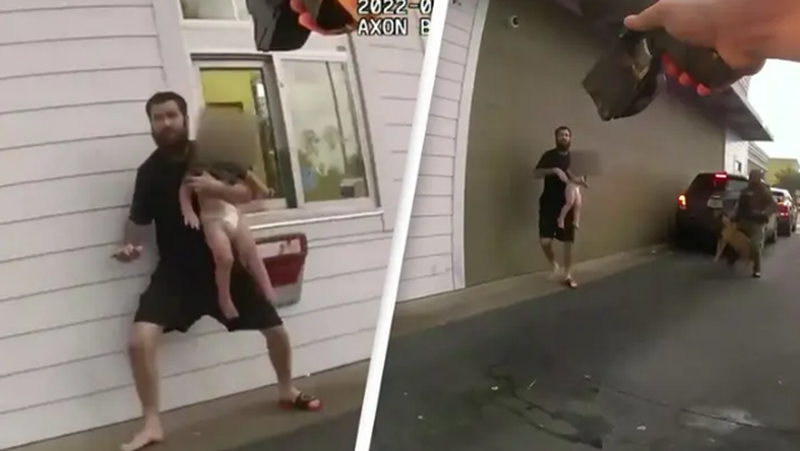 Footage from a US police body camera shows the shocking moment a man uses his baby as a human shield to prevent his arrest.

The footage comes from Flagler County police officers following a standoff between Brandon Matthew Douglas Leohner and officers attempting to arrest him.

The 27-year-old can be seen holding his infant child to his chest while at a fast food restaurant.

Officers chased Leohner after he allegedly grabbed his child and drove through the streets of Palm Coast, Florida with the child on his lap.

Police were called around 6 p.m. on Sept. 27 after receiving calls about a possible abduction of a 1-year-old boy.

As officers attempted to stop the driver, he sped away with officers in hot pursuit. Police officers were then able to confront the man in a McDonald's parking lot, where Leohner got out of his vehicle clutching the infant next to him.

Dashcam footage shows an agitated Leohner standing by the car window clutching the child as officers repeatedly call for him to put the child down.

As one officer successfully launches his taser hitting Leohner, other officers rush to remove the child to safety as the infant calls out "Daddy."

The footage ends with Leohner trying to escape before being pinned to the ground by officers using K-9s to subdue him.