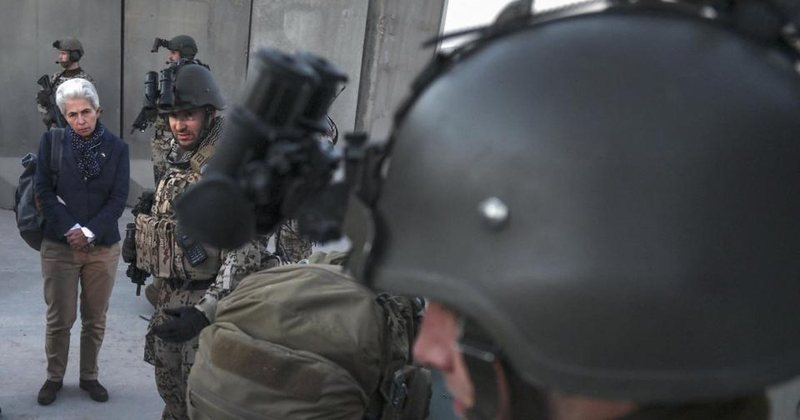 Germany's statement, which offers Ukraine 5 thousand military helmets as aid, has been described as a mockery in Ukraine. Kiev mayor and former world champion boxer Vitali Klitschko called it "a joke" that left him "speechless."

German Defense Minister Christine Lambrecht said Berlin, which has faced growing criticism for its refusal to supply arms to Ukraine, as other Western countries have done, was responding to a request for military equipment, particularly helmets.

British Defense Secretary Ben Wallace said he was not judging the decisions of others.

"Obviously, the UK has taken a view that deadly aid of a tactical defensive nature is something the Ukrainians need. But we are not judging the aid that other countries are providing," he said during a visit to Berlin.

Russia has amassed tens of thousands of troops near its border with Ukraine, but denies planning to attack its neighbor. The United States and Britain have begun sending more weapons to Ukraine.

"The German government agrees that we should not send deadly weapons to crisis areas because we do not want to escalate the situation, we want to contribute in other ways," Lambrecht told a joint news conference with Wallace.

She added that Germany was also supplying a military hospital to Ukraine and that it was still aiming for a peaceful solution. Klitschko, a former world heavyweight champion who lived for years in Germany and is now mayor of the Ukrainian capital, was not impressed with the helmet offer.

"The behavior of the German government leaves me speechless. The Ministry of Defense has apparently not realized that we are facing perfectly equipped Russian forces that could launch another invasion of Ukraine at any time," he told the German daily, Bild.

"What kind of support will Germany send next?" "Pillows?" He continued ironically.

Ukrainian Ambassador to Berlin Andriy Melnyk said the "symbolic gesture" was welcome, but insufficient as his country needed equipment for hundreds of thousands of soldiers, of whom helmets were not the most urgently needed part.

"We are pleased to see at least the beginning of a change in thinking. However, what we need most are defensive weapons," he said.

Wallace made it clear that the Nord Stream 2 pipeline could be an important tool to be used against Russia. Germany has not explicitly said it will give up the pipeline.

"If (Russian President Vladimir) Putin chooses to invade Ukraine ... he should not be rewarded by Europe further financing him and what he does with the gas revenue is he finances his army," Wallace said.